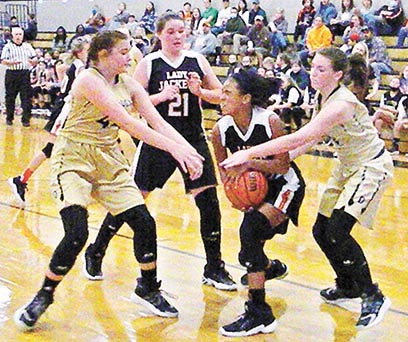 – Greenfield’s Rayanna Fisher fights against a Dresden player for possession of the ball.

At the start, Dresden received the ball with the first score of the game made by Dresden’s Haylee Jarred with a two-pointer. Greenfield got on the board with Brenley Little shooting two free throws. Greenfield was able to take the lead in the first quarter as Lady Jacket Rayanna Fisher shot a three-pointer.

Greenfield kept the momentum in the second quarter as the Jackets increased their score to 12 points while working hard on the defense. They finished the first half with a 12-9 lead that continued until the end of the game.

In the final quarter, Greenfield was able to keep its lead by picking up seven points, although team members missed seven potential points from the free-throw line. However, the teams’ defense did prevent Dresden scoring with the Lady Lions only taking three points from free throws.

In the end, Greenfield won 23-16 against Dresden and faced off against the Lady Chargers of Martin Middle School Monday night. See “Lady Chargers Run Away with Championship” for full details on that game and outcome.

Brenley Little had the most individual points overall with 15, and teammate Rayanna Fisher scored five points. For Dresden, Ellie Poole was the points leader with seven, while Haylee Jarred scored four. 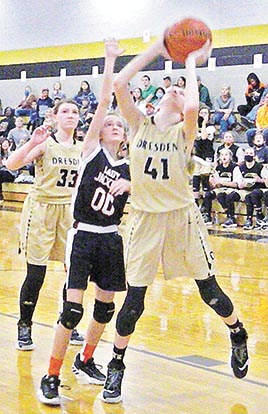