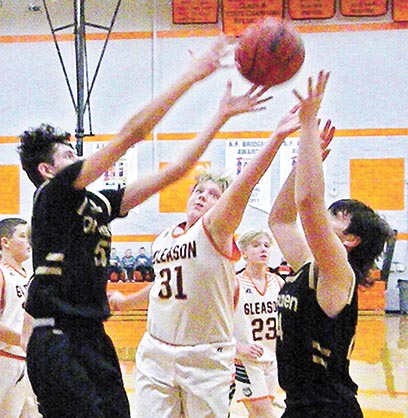 Both teams faced a hard match-up as they fought for the first score of the game before a foul on Dresden caused Gleason to get on the board as Drake Lehmkuhl scored from the free-throw line. Gleason was able to score five more points in the first quarter for the lead with Dresden only having four points. Gleason kept its lead in the second quarter with Kade Sawyers shooting a three-point shot. The Lions were not far behind as Wesley Chapman picked up four points. At the halftime it was still anyone’s game as the score had Gleason leading 15-13.

In the third quarter Dresden came back strong with Chapman shooting six points. This, along with the Lions’ strong defense holding off Gleason, gave the Lions the lead by one point going into the final quarter at 22-21.

Dresden was determined to keep its lead as they had three, three-point shots by Cooper Allman, Landon Cartes, and Ty Bizzle. But Gleason was still fighting for the win as Bo Tyler Bailey scored six points and Lehmkuhl scored four points.

With the combined efforts of both teams, the game finished in the fourth quarter with a tie of 33-33 that led to overtime. There were three minutes given to see which team would come out on top to win.

In overtime Dresden was only able to score two points by Tanner Oliver. Gleason totaled six points in all with Owen Taylor scoring four of those. In the end Gleason won over Dresden 39-35.

Points leader for Gleason was Owen Taylor with 14 points, followed by Drake Lehmkuhl with 10. For Dresden, Wesley Chapman led the team with 15 points and Landon Cartes with 8. 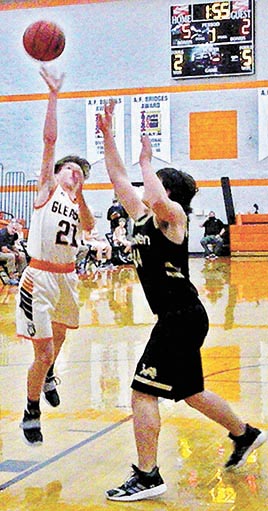 Gleason’s Owen Taylor shoots for a two-pointer while Dresden’s Tanner Oliver tries to stop the ball.