The proceedings began with Gleason City Judge Tommy Moore swearing-in the board members, beginning with Mayor Charles Anderson. Out of the eight candidates running for office in the November 3 election, the four available alderman seats were filled by: incumbent – Keith Radford; and newcomers – Danny Browning, Wade Cook and Tommy Hodges.

Mayor Anderson expressed his appreciation to the people of Gleason for supporting him and giving him their vote of confidence. He promised to be a good steward of the people’s money and strive to improve the city’s financial standing.

Mayor Anderson said of his predecessor, Diana Poole, “She served as mayor two terms and has been a great mayor. She has left the town in a good financial status, and for that, I am grateful.”

“I know actions speaks louder than words,” Mayor Anderson said. “I could make a lot of promises I might or might not be able to keep for various reasons, but I want to see Gleason grow. I want us to maintain having a good place to live. I want to see prosperity.

“I want to give something back to the town. The only way I know to do that, from a financial standpoint, is to donate the mayor’s salary, after taxes, back to the city.” Mayor Anderson stated the money will go toward the food voucher program, with certificates redeemable at the city’s only grocery store, Gleason Superette. “That will be available beginning January 1, 2021.”

Mayor Anderson encouraged everyone to remember the Golden Rule in their dealings with one another by “doing unto others as you’d have others do unto you.” He also asked local citizens to “think of what you can do for your town, not just what your town can do for you.”

Danny Browning, who is the town’s first black alderman, said, “I am honored to be voted in as vice-mayor. I’m looking forward to the next four years. It’s an honor I don’t take lightly. I feel blessed.” Browning has worked for the Sheriff’s Department for the past 22 years, and part-time as a Gleason police officer for about six years. Browning, who formerly lived in Greenfield, has been a citizen of Gleason for six years.

“It’s going to be a great four years,” Alderman Radford said. “I hope we can lure some more businesses out to the four-lane, and in the downtown area. It has a lot to do with the economy and people’s attitudes.” Radford, who is the only board member to be re-elected, works at K.R. Trucking, and has been a city resident for the past 15 years.

“I’m just very humbled to win,” said Alderman Tommy Hodges. “I’m glad the people of Gleason have given me the opportunity to serve them.” Hodges was born and raised in Gleason, where he has resided for the past 52 years. He works at K.T. Clay Company.

During the Gleason City Board meeting that followed the swearing-in ceremony, Mayor Anderson announced he plans on having a student from Gleason School lead the group in reciting the Pledge of Allegiance at each board meeting. He called Gleason 7th-grader Luke Lawrence forward to lead everyone in the Pledge. He also mentioned several of Luke’s accomplishments. Mayor Anderson stated Luke, who is the 13-year-old son of Lee and Amy Lawrence, claimed the championship trophy and $100 prize in the 2020 Weakley County Schools Spelling Bee. He is also the regional winner of the 4-H speech competition.

In department reports, the board was informed that a crew from Athens, Georgia, will begin installing the new playground equipment at Snider Park on December 8 and should have the work completed by December 10.

Board members voted unanimously to reappoint all of those nominated by Mayor Anderson.

In announcements, Mayor Anderson stated the next board meeting is at 7 p.m. Thursday, January 7. However, all future regular board city meetings will be held at 7 p.m. on the third Monday of each month. 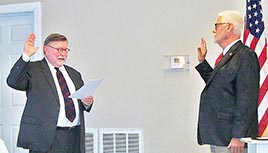 Gleason Mayor Charles Anderson recites the oath of office administered by Judge Tommy Moore, during a special called meeting of the Gleason City Board on Monday. 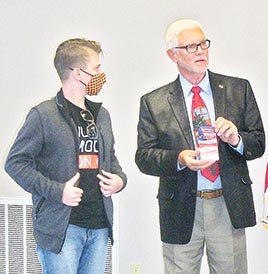 Gleason 7th-grader Luke Lawrence (L to R) was presented with a copy of the Declaration of Independence by newly-elected Gleason Mayor Charles Anderson during Monday’s monthly city board meeting. Lawrence led the group in reciting the Pledge of Allegiance.