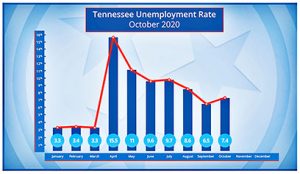 NASHVILLE (November 25) — According to Tennessee Department of Labor and Workforce Development Commissioner Jeff McCord, unemployment for the month of October increased at the county and state levels, but decreased nationally.

Commissioner McCord notes, Tennessee employers added nearly 25,000 new jobs between October 2019 and October 2020. However, even with the creation of new jobs, the state’s unemployment rate inched upward for the first time in three months.

Tennessee’s preliminary, seasonally-adjusted, statewide unemployment rate during October 2020 was 7.4 percent, an increase of 0.9 of percent from September’s revised rate of 6.5 percent. One year ago, the unemployment rate in Tennessee was 3.3 percent.

The number of jobs increased by 24,600 during the month as Tennessee businesses rebound from COVID-19 business closures in the spring. Employers in the professional/business services sector created the most jobs during the month. The next largest increases in employment were in leisure/hospitality and manufacturing sectors.

Unemployment in 93 of Tennessee’s 95 counties increased in October. Davidson and Sevier counties saw their rates decrease during the month.

Nationally, unemployment decreased from October’s revised rate of 7.9 percent to 6.9 percent in October. However, the U.S. rate is 3.3 percentage points higher than it was in October 2019.

Weakley County’s unemployment rate of 6.6 percent for the month of October was 1.9 percent higher than it was in September, when unemployment registered 4.7 percent. It was 0.3 percent lower than the national rate of 6.9 percent, and 0.8 percent less than the state average of 7.4 percent. Out of a total countywide labor force of 15,842 workers, 14,792 Weakley Countians were employed and 1,050 were unemployed.

Carroll County’s jobless rate was 7.6 percent for October, which represents an increase of 2.3 percent from the previous month’s rate of 5.3 percent. It was 0.7 percent higher than the national rate and 0.2 percent more than the state average. Out of a total countywide labor force of 12,134 workers, 11,207 were employed and 927 were unemployed.

Henry County recorded a jobless rate of 7.5 percent for October, which is 2.2 percent more than September’s rate of 5.3 percent. It was 0.6 percent higher than the national rate and 0.1 percent more than the state average. Out of a total countywide labor force of 14,035 workers, 12,980 were employed and 1.055 were unemployed.

At 8.0 percent, Obion County’s jobless rate for October increased by 2.5 percent from September’s rate of 5.5 percent. Unemployment in Obion County was 1.1 percent more than the national average, and 0.6 percent higher than the state rate. Out of a total countywide labor force of 12,730 workers, 11,711 were employed and 1,019 were unemployed.

The Northwest Tennessee Economic and Community Development Region, which includes the counties of: Benton, Carroll, Crockett, Dyer, Gibson, Henry, Lake, Obion and Weakley, registered an average unemployment rate of 7.6 percent for the month of October, which represents an increase of 2.1 percent above September’s rate of 5.5 percent. The region has a combined labor force of 109,149. Of this number, 100,867 were employed and 8,282 remained unemployed.

Williamson County had the state’s lowest unemployment in October with a rate of 4.6 percent, which is up 0.8 of a percentage point from its revised October rate of 3.8 percent

Shelby County recorded October’s highest jobless rate in Tennessee. At 11 percent, the county’s unemployment increased by 0.7 of a percentage point when compared to the previous month’s revised rate of 10.3 percent.

Jobs4TN.gov also offers online assistance with writing a resume that will catch the attention of employers, advice on how to engage and impress during job interviews, and details about potential job training opportunities.

There are more than 80 American Job Centers across Tennessee that are open for business and offering job seekers one-on-one personalized assistance. Career specialists are ready to work with individuals to devise a reemployment plan that will help them rejoin the state’s workforce.

All the assistance is free to anyone who needs help finding a new job or career path.