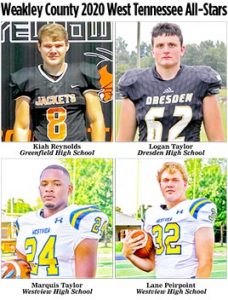 Normally these four players, along with many other players for schools all over West Tennessee, would play a game at the University School of Jackson. This game brings together 40 schools from all across West Tennessee and the players would be divided into two teams of North and South during this game. However, this year the game has been called off by the West Tennessee All-Star Football Game Committee. A statement released by the committee noted, “When planning began, we were hopeful that we would make it to game day in December. Since then, as everyone knows, COVID-19 has been on the rise. Unfortunately, we have had to make the difficult decision to cancel the game. We are sad for these senior football players and their fans, but we truly feel this decision is in the best interest of the health of our all-star communities.”

The game was scheduled for December 11.