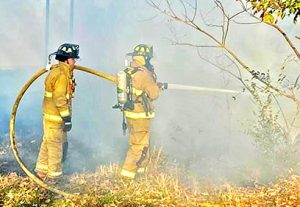 The Sharon Fire Department responded to a grass fire Thursday afternoon on Mt. Vernon Road, which threatened a nearby residence. They saved the home, but an outbuilding was gutted by the blaze.

SHARON (November 19) — High winds fueled a grass fire in Sharon Thursday afternoon, that spread to a nearby residence and threatened to catch the structure on fire.

Sharon firefighters arrived at the scene 12 minutes after the initial call, and attacked the flames around the structure. They got the fire contained before focusing on a shed that was ablaze.

After another engine and additional firefighters arrived, they worked to extinguish the woods and field that were on fire.

The forestry department also arrived at the scene and helped Sharon firefighters contain the blaze.

The forestry department determined the fire started beside the roadway, possibly from a cigarette tossed from a passing vehicle. High winds caused the blaze to spread rapidly towards the residence, which was unoccupied at the time.

Sharon Fire Chief Gary Eddings stated, fortunately, there was no damage to the residence. Sharon Fire Department and Forestry Department personnel were on the scene for two hours extinguishing the blaze.

Chief Eddings warns the public of the dangers of tossing lit cigarettes outside, especially when dry and windy conditions are present.

“One flick of a cigarette outside when conditions are dry could cause great harm to the community,” Chief Eddings said.