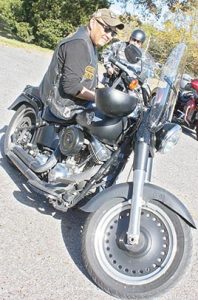 MARTIN (November 9) – Thirteen years ago this month, six Americans lost their lives in an ambush by Taliban members in Aranas, Afghanistan. Five were United States Army paratroopers from the elite 1st Platoon, Chosen Company, 2nd Battalion (Airborne), 503rd Infantry Regiment, 173rd Airborne Brigade Combat Team, headquartered in Vicenza, Italy. One was a United States Marine. There were 14 Americans involved in that battle, along with one squad of Afghan National Army soldiers. Among those is Martin resident Master Sgt. Conrad Begaye, who was a Staff Sergeant while on that deployment to Afghanistan. Begaye is a Navajo who enlisted in the Army at 23 years old. He serves as Senior Military Instructor for the Skyhawk Battalion, UT Martin’s ROTC cadet training program.

It was November 8, 2007, when the members of the unit prepared for a meeting with villagers and elders near Aranas. Soldier recounts of that meeting, or Shura, the following day detailed a sense of unease after repetitive postponement and questions by village men who were of military age seemed to drag the meeting out. When the unit finally left the Shura nearly one and a half to two hours later, they departed at 3 p.m. making its way to Camp Outpost Bella. Villagers followed the Chosen Company down the trail flanked by cliffs as the setting sun seemed to shine a beacon on the service members. One shot was fired as the villagers fled to the hillsides. Two more shots were fired and an onslaught of bullets and RPGs aimed at the Chosen Company bounced off the cliffs, hitting the members in an orchestrated three-prong attack that would wound every soldier that fateful day – November 9, 2007.

Begaye took his men over a cliff to seek cover as they were hit from every direction by enemy fire in the ambush. Rendering aid to his injured men, Begaye radioed for air support, reported locations and instructed his platoon to return fire. He was wounded himself, having sustained several gunshot wounds in the attack.

When asked how he could remain so determined and calm amidst the chaos of gunfire and wounded soldiers, Begaye credited his training with the United States Army.

The members of the Chosen Company are part of an elite Airborne Ranger Unit of the Army. Established in 1963 on Okinawa as a reaction force for the Pacific Command, the 173rd Airborne brigade of paratroopers were dubbed “Sky Soldiers” by Nationalist Chinese paratroopers who trained with them. In May 1965, the brigade deployed to Vietnam as the first major U.S. Army ground combat unit to serve there. There are more than 1,790 Sky Soldiers’ names on the Vietnam Memorial Wall in Washington, DC.

The brigade was inactivated January 14, 1972, at Fort Campbell, Kentucky. In June of 2000, the U.S. Army reactivated the unit as part of an expansion of the paratrooper battalion stationed at Vicenza, Italy, to a full brigade. As such, the 173rd served as the U.S. Army Southern European Task Force, the only European-based conventional airborne strategic response force. In 2006, the brigade was reorganized as the 173d Airborne Brigade Combat Team (ABCT).

Begaye was studying journalism in college and working as radio disc jockey for a country music station in his home state of Arizona when he decided to enlist in the Army, noting the enlistment posters had him thinking it would be cool to jump out of airplanes. Twenty-one years later, Begaye is still serving his country in the Army.

Initially, his unit was preparing for deployment to Iraq when the soldiers learned they would be heading to Afghanistan only a few months later. The preparation shifted to training for the rocky hills and lush vegetation of Afghanistan, much different than the sandy terrain of Iraq. The unit deployed to Afghanistan in May 2007.

Although his time in service has seen a deployment to Iraq and three tours of duty in Afghanistan, the events leading up to November 9, 2007, and that day are forever ingrained in his memories. He received a Silver Star, the third-highest military combat decoration, for his actions that day. Upon receiving the medal, Begaye said he would wear it in honor of those who didn’t make it. One member of the unit crafted a silver bracelet for each of them engraved with the names of those who didn’t survive that day.

The Chosen is considered one of the most-decorated units in the war in Afghanistan. The mission for those deployed to Afghanistan was to conduct counterinsurgency operations in an area populated by 525,000 Afghans. Combined with Afghan allied forces, there were approximately six security personnel for every 1,000 Afghans. Outnumbered and under constant enemy fire or facing ambushes, Battalion Commander Col. William Ostlund had a goal of “separate, stabilize and engage” for the members of his battalion while deployed to Afghanistan.

In 2017, Gregg Zoroya released his book, “The Chosen Few,” which depicts the battles of the paratroopers while in Afghanistan with soldier accounts of events leading up to the Battle of Wanat. Zoroya captured the story of the Bella Ambush and Begaye’s men who lost their lives that day. Two of the men were awarded the Medal of Honor. Two received the Distinguished Service Cross. More than a dozen were awarded the Silver Star and two dozen received a Bronze Star.

In addition to his Silver Star, Begaye has been awarded a Bronze Star, two Purple Hearts, the Meritorious Service Medal, the Army Commendation Medal with Valor, the Army Commendation Medal, the Ranger Tab, Parachutist Badge, Combat Infantrymen’s Badge and the Expert Infantrymen’s Badge. Begaye’s battle scars from being shot in the head, arm, back and side are not as deep as the emotional scars carried as a result of fallen comrades.

His service brought him to Martin in January of this year, where he helps train and mold the next generation of soldiers. While here, he has already joined the American Legion Post #55 of Martin and is a member of the American Legion Riders. When he’s not taking students through wilderness training or in the classroom teaching them the core values of the United States Army, he can be found with his knees in the breeze on his Harley Davidson taking in wind therapy.

He served as UT Martin’s guest speaker for the annual Memorial Day ceremony this year where he reminded the audience of the sacrifices made by service members, encouraging them to remember the fallen. As a Native American, he also paid tribute to the contributions of Native Americans in service during his speech.

Begaye has been tabbed for the rank of Sergeant Major, the highest rank for a Non-Commissioned Officer in the United States Army.

With such a distinguished background and long list of service decorations, the humble Begaye will always remember his time spent alongside brave, fallen soldiers and stand to shake the hand of a World War II veteran while thanking him for his service.