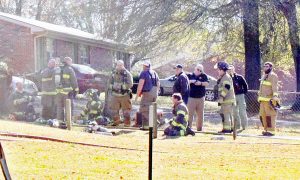 MARTIN (November 18) — According to Martin Fire Chief Jamie Summers, a fire call was received at 11:29 a.m. at a five-apartment residential complex located at 106 Murphy Dr. in Martin.

A total of 16 Martin firefighters responded with three fire trucks, two ambulances, and a squad truck.

Dresden Fire Department provided mutual aid as stand by at Martin Fire Station No. 1, in case another fire flared up. They brought three firefighters and a pumper truck.

THP also responded to the scene.

Chief Summers said, “When firefighters arrived at the scene, they saw heavy fire and smoke billowing out of a window on the first floor and heavy smoke coming out the roof vents. The fire spread to a second story apartment and continued up into to the attic.

“They made entry into the room where the fire was located and knocked the fire out,” Chief Summers said. Firefighters then extinguished the flames in the second-floor apartment and attic area.

Although there was smoke damage in the other apartments, fire damage was contained to the first and second floor apartments in the southwest corner of the complex.

Chief Summers estimates the fire damage to be less than 30 percent of the value of the five-room apartment complex, and he believes the damaged apartments could be renovated.

The cause of the fire was due to food cooking on the stove in the first-story apartment, according to Chief Summers.

Fortunately the residents of the apartment complex quickly evacuated the building and there were no injuries.

Firefighters extinguished all signs of the flames and cleared the scene at 1:48 p.m.