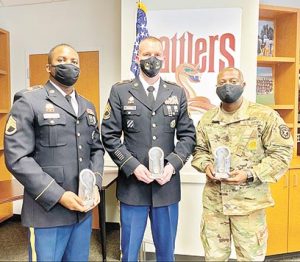 United States Army recruiting centers recently competed for awards based on recruitment, knowledge and degrees of professionalism. Sgt. First Class Jeffrey Steinman (Center) of Martin recently earned the Station Commander of the Quarter award in Baton Rouge, Louisiana on behalf of the Tupelo, Mississippi, Recruiting Center. Alongside Steinman, and also a team member with the Tupelo Recruiting Center, First Sgt. William Curry (Right) was awarded the First Sergeant of the Quarter Award. Pictured with the two is Staff Sgt. Scott from the Shreveport Recruiting Company.

McFarland’s time in service has been a unique Army career. He enlisted in the Reserves program as a mechanic for the Army while a sophomore in college. Once he finished his degree, McFarland was fast-tracked into Officer Candidate School. In 2010, he became an officer of the Army’s Signal Corps, which creates and manages communications and information systems for the Army.

He spent time in Honduras as a deputy through the Joint Task Force. Of all of the places he has been stationed in his career, McFarland said Honduras was one of his favorites. While there, the unit provided many levels of humanitarian assistance for the poverty-stricken area, which served to be rewarding for the captain.

His communications training would eventually lead him to service as part of the 1st Space Battalion with the U.S. Army Space and Missile Defense Command. McFarland said the Army Space program has been around for a while as the Army is in control of satellite communications. He worked with the development and security of communications as it pertains to protecting the interest of the United States.

From there, his career led him to Okinawa, Japan, where he served with a unit responsible for monitoring satellite communications. It was in Japan where one of his sons was born. His wife of 12 years didn’t mind traveling the world as McFarland’s service career has taken him to 12 locations within 14 years.

His role now as a company commander for the Tupelo Recruiting Center affords him the chance to share his story of service with others, especially those interested in following a similar path.

First Sgt. Curry has had his share of exploring the globe as well since enlisting in the United States Army. Growing up, Curry saw many of his uncles serve in the military and he wanted to carry on that family tradition of service. He enlisted and departed for basic training shortly after graduating high school in 1997.

Curry said he had a good relationship with his local Army recruiter, which made the decision and transition an easier process for the young soldier. Since his time in service, Curry has seen the deserts of Egypt, Bosnia, Kuwait and Iraq, where he was a mechanic.

The E8-ranked First Sergeant is eligible for Sergeant Major next year, the highest rank of a Non-Commissioned Officer in the U.S. Army.

Curry said his time in service has been rewarding, particularly in the area of recruitment as he is able to help others with their career and watch them develop throughout the process of becoming a soldier.

Curry resides in Jacksonville, Florida, with his wife and six daughters. When asked if he feels outnumbered by the many females in his household, he joked the family does have a male dog in the house that helps to bring some balance.