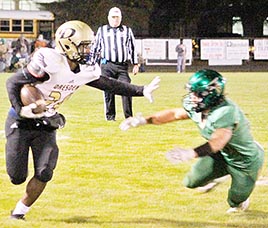 Dresden’s #24 Raymond Johnson tries to push off a Lake County player to make a first down. Photo by Jennifer Reddick Schlicht.

LAKE COUNTY (November 13) – The Dresden Lions had a difficult game against Lake County in round two of the playoffs as they lost 26-14 Friday night.

Dresden had trouble breaking past Lake County’s defense, as the Lions were unable to make a score in the first half of the game. Lake County, however, was able to begin with a 97-yard run for a touchdown and make another touchdown in the second quarter for a 12-0 lead at halftime.

Dresden was finally able to make it on the board in the fourth quarter when DeAngelo Lambert made a one-yard run for a score. Then Chandler Turnbow made a five-yard run.

On the receiving end, Raymond Johnson had 66 yards and Trevor Moore had 22 yards.

Logan Taylor led in defense with four tackles, six assist and one tackle for a loss. Trevor Moore was able to have three tackles, four assists and one fumble.