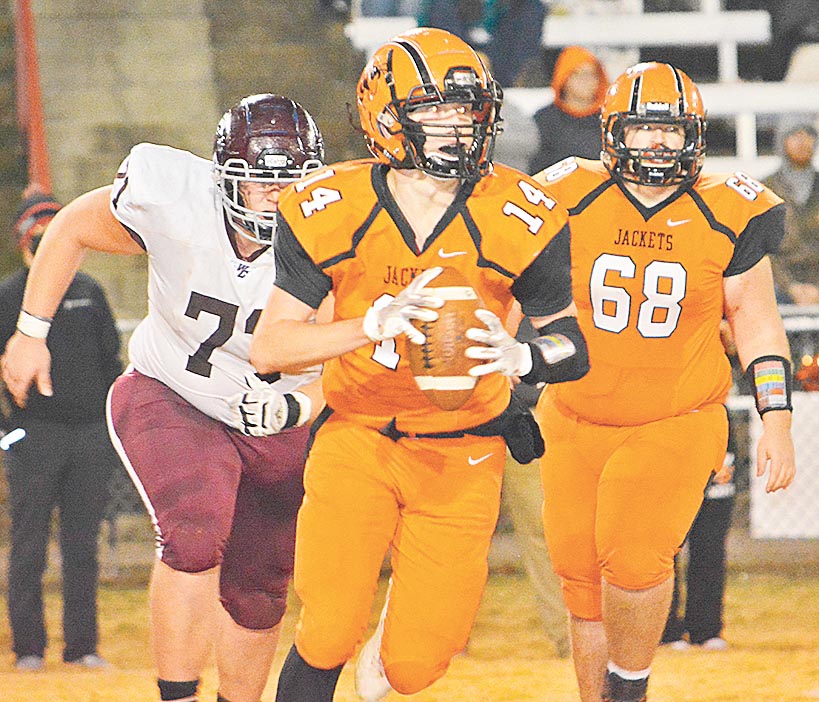 GREENFIELD (November 13) – After suffering their only regular season loss to West Carroll on October 30 in Atwood, the Greenfield Jackets were looking for some home-field payback Friday night in the second round of the state playoffs. But that didn’t pan out as the Jackets fell just two points short for a 14-12 season-ending loss.

The War Eagles forced the Jackets to punt away their opening possession and then went on to score during their first turn at offense with a two-yard keeper by quarterback Xander Moon, who added two on the conversion for an early 8-0 lead.

Moon ended Greenfield’s next possession with a pass interception, but Greenfield’s defense prevented the War Eagles from capitalizing on that turnover, forcing the punt.

The Jackets made their debut on the scoreboard early in the second quarter as Chandler Finch capped off a six-play drive with a three-yard touchdown carry. But Greenfield’s two-point attempt failed, leaving the Jacket’s trailing 8-6.

The War Eagles replied less than a minute later as Moon broke away for a 47-yard scoring run. The Jackets stopped the conversion attempt, but West Carroll was now up 14-6 with 9:18 left to play in the first half.

Those were still the numbers on the scoreboard at halftime following multiple stalled drives by both teams.

The Jackets shortened that lead to two points seven minutes into the third quarter when Hayden Smith ran it in from 14 yards out. Smith, however, was kept out of the end zone on the conversion attempt, and that turned out to be a game-winning stop for West Carroll’s defense.

A fourth-down quarterback sack by Greenfield’s Alex King halted West Carroll’s next drive at the Greenfield 14-yard line, but the Jackets found themselves punting the ball back two and half minutes later.

The Jackets started their final possession of the game and the season after stopping the War Eagles again on downs 14 yards short of the goal line. With two and a half minutes left to play, the Jackets went to the air for the most part and pushed their way up as far as their own 42-yard line.

But time was not on Greenfield’s side, and with just seconds left on the clock, quarterback Baker Porter went for it with a long-bomb pass. That pass was intercepted by West Carroll’s Jacob Blankenship, giving the War Eagles possession at their own four-yard line with just three seconds on the clock.

From there, one offensive play by West Carroll was all it took to kill the clock, sending the War Eagles on to the third round and bringing Greenfield’s season to a close.

The Jackets end their season with an impressive 8-2 overall record, both losses to West Carroll.