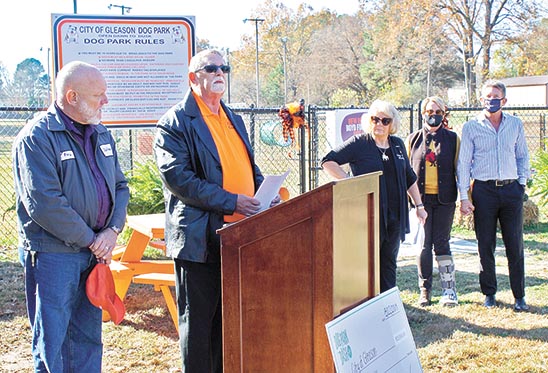 (L to R) Gleason Department Head Tony Terrell, Alderman Jim Phelps, Mayor Diane Poole, UT System President Randy Boyd and his wife Jenny, were on hand for the grand opening of the Gleason Dog Park Friday morning. The event featured a tree dedication for the late Ronnie Arnold, who was a member of the city’s Dog Park Committee and died before the project was complete. The city’s Dog Park was a project Gleason earned through a grant from the Boyd Foundation, a philanthropy of Randy and Jenny Boyd, to make Tennessee one of the most pet-friendly states in the county. Photo by Sabrina Bates/The Enterprise

GLEASON (November 13) – Mid-morning sunlight and a warm breeze set the mood for the grand opening of Gleason’s Dog Park at Snyder Park Friday, November 13, when community members and dignitaries gathered to celebrate the city’s latest pet-friendly addition to Tater Town.

After an application process and efforts showing support for a city dog park, Gleason was notified last year it was awarded a $25,000 grant to build the park that caters to canines. The grant was funded through the Boyd Foundation, organized by UT System President Randy Boyd and his wife, Jenny, with a vision to make Tennessee one of the most pet-friendly states in the country. Known as the Dog Park Dash, the Boyd Foundation has a goal of awarding 100 communities across Tennessee with a dog park grant within three years. Gleason was chosen in the second year of the Boyd Foundation initiative.

He told the crowd Gleason represents better than many other communities and it is the enthusiasm of citizens that made the community stand out.

Boyd added the park is not just for pets, but for people too.

“In a time when the nation is so divided, we need things that bring people together,” Boyd said, noting what better way to do that than by offering a park bench to share. He said a park bench brings together young and old, Democrats and Republicans and wealthy and not-so-wealthy people from all walks of life.

During last year’s announcement of the City of Gleason as recipients of the Dog Park Dash grant, a fifth-grade class from Gleason School was on hand during Boyd’s visit to Tater Town. Members of that class joined in the grand opening and ribbon cutting event on Friday. Boyd invited the now-sixth-graders to consider a college within the University of Tennessee System later in life. UT Martin Chancellor Dr. Keith Carver was also in attendance Friday for the dog park opening.

Mayor Diane Poole thanked the businesses and community members who helped make the grant award possible through their support last year when she had a broken hip and her son, Marty Poole, was home to help care for her. Marty visited businesses and snapped pictures to submit with the city’s application for the dog park grant.

Gleason Vice Mayor and Alderman Jim Phelps also thanked the team of designers and builders who helped bring the project to reality. Most notably, the late Ronnie Arnold, a lifelong Gleason resident and member of the city’s Dog Park Committee who died before the project was completed earlier this year, was memorialized with a Tulip Poplar tree planting and concrete plaque at the entrance of the dog park. The Tulip Poplar is Tennessee’s State Tree.

Phelps, in a shaky voice, said Arnold was instrumental in the project and dedicated the tree in his memory. 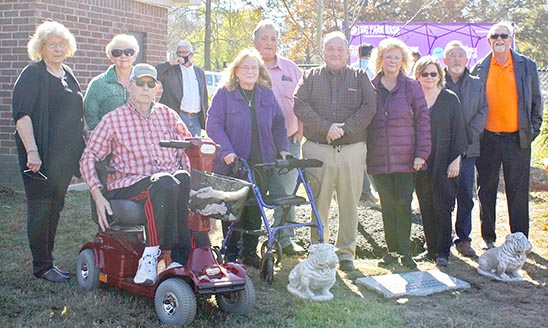 The City of Gleason planted a Tulip Poplar, Tennessee’s State Tree, and unveiled a monument in dedication to the late Ronnie Arnold, a Gleason resident and Dog Park Committee member who was instrumental in the design and progress of the project who died before the dog park was completed. On hand for the dedication Friday morning were officials and members of Arnold’s family, (L to R) Gleason Mayor Diane Poole, Marilyn Bobo, Danny Bobo, Debbie Turner, Ronnie Turner, Dennis Arnold, Martha Arnold, Caron Arnold, Glen Arnold and Gleason Alderman Jim Phelps.