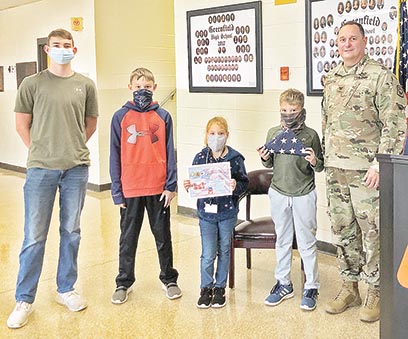 Col. Trent Scates presented the United States flag he flew over his headquarters in Kuwait in honor of Greenfield School to student representatives on Veterans Day. (L to R) Representing the 10th grade was Matt Scates with brother, Phillip, representing 5th grade. They are the sons of Col. Scates and wife Beth. Third-grader Katey Taylor and 4th-grader Tanner Taylor represented their grades. They are the grandchildren of Sgt. Major Kevin Ray who served with Scates in Kuwait.

GREENFIELD (November 11) – During his most recent deployment in the Middle East, Colonel Trent Scates flew a flag in honor of the students of Greenfield School, his alma mater. On Wednesday, he presented that flag to student representatives after addressing fifth-graders at the 11th hour of the 11th day of the 11th month.

Principal Jeff Cupples began with a welcome and a quiz of Missy Galey’s fifth-graders, the chosen audience due to COVID-related restrictions, regarding the significance of the timing. The students soon concluded it had something to do with Armistice Day. Cupples then confirmed the time and date of the signing of the 1918 armistice ceasing hostilities on the Western Front of World War I and the reason Americans now celebrate all veterans on November 11.

Scates began his remarks acknowledging that most of his audience would know him better as “McCall’s dad, or Matt’s dad or Phillip’s dad or Coach Scates,” referencing his children and his time coaching local city athletics, rather than as the officer standing before them in his combat uniform.

He underscored the significance of Veterans Day. He encouraged students to take time to talk with veterans – who would later be honored with a drive-by parade in front of the school – and discover what life was like when they wore the uniform.

“I’d also like you to talk to the families of these individuals, for they serve when their family member is wearing the uniform,” he added. “When I was overseas, my wife, Beth, and our kids also served as well.”

Scates then transitioned to his remarks regarding the flag presentation. He told the group, last year, when he was serving with the 194th Engineer Brigade of the Tennessee Army National Guard in Kuwait, his hometown school made sure he felt connected to Greenfield. Students mailed cards and letters, which Scates had with him on Wednesday.

“While deployed, one of the biggest things that brings us the greatest joy is receiving what is called ‘mail call’,” he explained.

Then, while holding a package of cards and letters he had saved, he noted he wanted to recognize the students, faculty and staff who had sent the communications while he was abroad.

“In recognition of your support, I flew this flag in honor of you on the 30th day of July 2020,” he said as he pulled the boxed flag into view.

He then showed the students the accompanying certificate of authenticity addressed to Greenfield School which reads, “This certifies that this American flag was flown over Headquarters and Headquarters Company 194th Engineer Brigade Theater Army camp Buehring, Kuwait during these named operations – Operation Spartan Shield 19-20; Operation Inherent Resolve 19-20, Operation Freedom’s Sentinel 19-20.”

He explained that the three named operations covered eight different countries in the Middle East including Syria, Iraq and Afghanistan.

Katey and Tanner Taylor, grandchildren of Sergeant Major Kevin Ray, who served with Scates in Kuwait, as well as Scates’ sons, Matt and Phillip, served as representatives of the school to accept the flag.

During a question and answer session following the presentation, Scates noted that he was in his 31st year of service in the Tennessee National Guard and this was his third deployment to the Middle East. The students’ questions ranged from whether he had seen snakes in the desert (yes, vipers) to personal hygiene (due to COVID, they wore masks, bathed as often as possible and washed hands frequently) and how severe his preparation for combat had been.

The class then joined Scates for a photo opportunity outside at the school’s flagpole.

In reflecting on the day, Cupples noted, “In addition to their academic subjects, we are striving to teach our students daily lessons on integrity, respect, and unity. Veterans like Col. Scates embody these values. We appreciate the time he spent with us as well as the other veterans who joined us for our parade. We will always be humbled by their sacrifices and grateful for the freedoms they protect.”