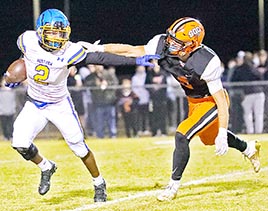 Westview Javion Goins looks to run past South Gibson’s players in Friday night’s game where the Martin Westview Chargers traveled to South Gibson November 13 for the Class 3A state championship round two playoffs. The Chargers previously lost their game against South Gibson 26-19 and Westview was unable to bring home a win. Westview lost to the team a second time by a score of 21-17 and finished its season. The Chargers completed this season 7-5 overall and 2-2 in the region. Photo by Christel Thompson