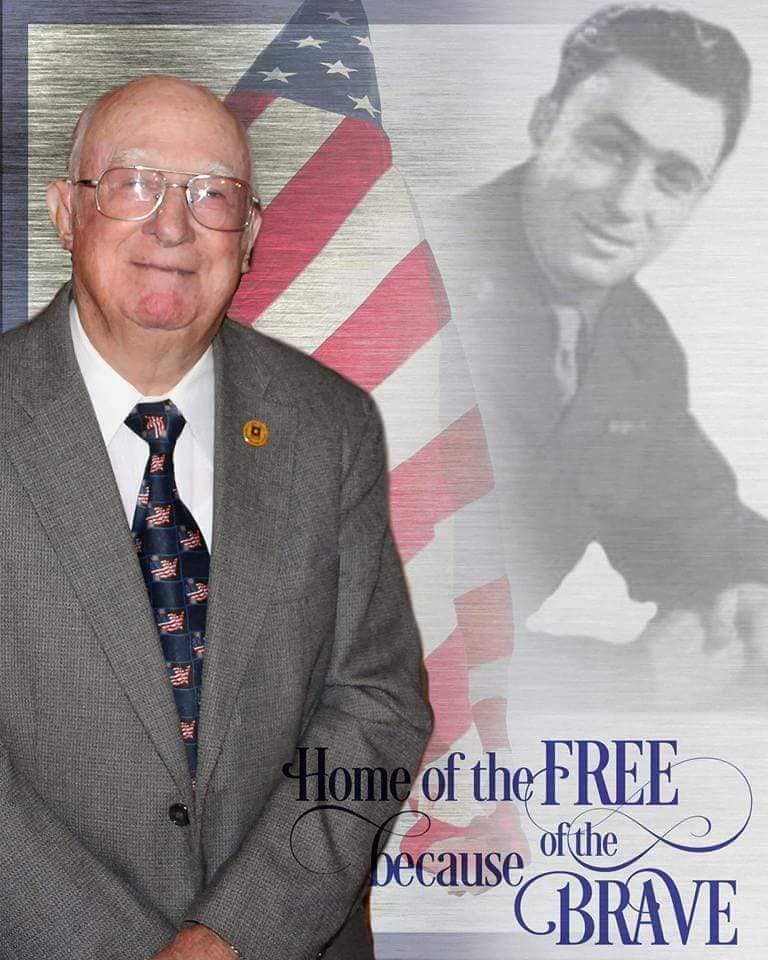 WEAKLEY COUNTY (October 28) — This Veterans Day, it is only fitting that members of the Armed Forces of the United States, who served proudly at home and abroad, be recognized for the service they rendered to their country.

An American flag flies atop a flagpole in the front yard of one of Weakley County’s last living WWII veterans, T. Joe Walker, 97, of Martin, who has the distinction of being a member of what has come to be known as “The Greatest Generation.”

The reason the United States and the other Allied nations were successful in defeating the Axis powers, composed of the fascist, dictatorial regimes of Germany, Japan and Italy, was because of patriotic, freedom-loving Americans like Walker.

When asked what the “T.” in his name stands for, he explained it is an initial name, not an abbreviation for a name.

In December of 1923, T. Joe Walker was born to Neal Walker and Lillian Gatewood Walker. The couple raised a total of 12 children to adulthood on their family farm, located in the Hyndsver Community near Martin.

“I grew up on the farm when times were hard, but the Lord has blessed me greatly,” Walker said.

He earned an 8th-grade education at Paris School, which was a one-room schoolhouse near the Hyndsver Community.

Walker was inducted into the U.S. Army in 1943 at the age of 20. He was assigned to the 163rd Engineer Combat Battalion, which served in the European Theater of Operations. His unit was activated at Camp Van Dorn, Mississippi. Walker said, “A lieutenant told me in Van Dorn, Mississippi, that he was going to make a bridge-builder out of me if it killed us both.”

His group was later sent to Champ Shanks, New York, where they were transported to Wales on the USS Cristobal, which is coincidentally, the same ship they returned on.

Their first camp was on Salisbury Plain in Wiltshire. Nex,t they were sent to Over Norton Camp, near Chipping Norton in Oxfordshire. Walker’s battalion left their English base on June 21, 1944, as they prepared to cross the English Channel. They left the English port during the night of June 26 and landed on Utah Beach in France on June 27, which was 21 days after the initial D-Day invasion.

Once in Normandy, the battalion kept going across France into Germany, all the way to Salzburg, Austria, by the time the war was over.

Walker recalled, “Salzburg, Austria, was the most beautiful place I ever saw.” He remarked the mountain scenery was breathtaking.

The German Army placed land mines in the path of the oncoming Allied troops and blew up bridges to slow them down.

The 163rd Engineer Combat Battalion began clearing minefields so the unit could build and maintain the roads and bridges needed for the troops, tanks, vehicles and supplies to advance on the enemy. They also secured water supplies and constructed or demolished obstacles, as needed. Additionally, the unit occasionally acted as infantry. Some of the soldiers in Walker’s outfit were killed by anti-personnel German S-mines, which were referred to as “Bouncing Bettys.” When triggered, these mines were launched into the air and detonated about one meter (three feet) from the ground. The explosion projected a lethal spray of shrapnel in all directions.

Walker, whose rank was Technician 4th Grade (E-4), was a heavy-duty supervisor for building bridges.

“It was my duty to take care of supplies and men and do whatever it took to get the bridges built,” Walker said.

Once installed, the bridges allowed personnel, vehicles and supplies to cross the rivers as they advanced toward the enemy.

Sometimes the Germans would destroy the bridges they built and they would have to go back and repair them.

In order to accomplish their mission, the unit had to improvise, and do things they’d never done before, often with equipment ill-suited for the job, in less-than-ideal conditions.

“We followed the infantry all the way,” Walker said.

They were on constant guard for sniper fire and attacks by German fighter planes.

It was a situation where the soldiers had their rifles with them at all times while they worked.

Walker stated, when he climbed on the back of a truck to move to another location, he suddenly noticed a sniper with a rifle pointed at him. He immediately alerted the others inside the truck and fell to the floor. The driver was wounded in the shoulder, but Walker was unharmed. They sped away, and when they arrived at their destination, Walker saw a row of bullets in the side of the truck. Had he not quickly lain down, he would have been shot. Although his unit was under fire multiple times, this was the closest he came to being hit by enemy fire.

The 163rd Engineers did not have an official battalion crest like many other units, so they used one designed by a commercial artist who served at Battalion HQ. All bridges built by the 163rd sported a sign with an ape holding a hammer in one hand, a rifle in the other, and a bridge truss in the background. The crest signified the name of their unit, which was dubbed the “Striped-Ass Apes.”

Between the time they landed in France and VE Day on May 8, 1945, Walker’s group was assigned to 1st Army, 3rd Army and 7th Army. They participated in campaigns in Normandy, Northern France, Ardennes-Alsace, Rhineland and Central Europe.

Walker recalled an incident that occurred while he was serving with the U.S. 3rd Army. He states General George S. Patton rode by one day while members of the 163rd were working. When a member of his unit failed to salute Gen. Patton, the general had his driver stop the jeep, and asked the soldier, “Do you know who I am?” The solder replied, “No.” He said, “I’m General Patton.” The soldier said, “Pleased to meet you,” and told the general his name. Because he failed to salute the general, as required under military regulations, Gen. Patton had him thrown in the brig, where he spent the night before being released the next day.

Walker said of Gen. Patton, “He was somewhat of a soldier. I was glad to be associated with him.”

A funny story Walker recalled involves his loud snoring, which led to a prank by his fellow solders. After he was sound asleep, they carried his bed outdoors. When he woke up, he was shocked to discover he was outside in the snow.

By war’s end, the 163rd constructed 40 bridges. Some were permanent wooden bridges, but most were temporary pontoon bridges, also known as floating bridges, which could be quickly assembled for rapid deployment of troops and equipment.

When the war ended, the 163rd was in Austria.

Walker was discharged from the Army in January 1946.

“I was glad to be home,” Walker said.

Walker and three of his brothers served in the U.S. military during WWII. But, not all of them survived the conflict.

In Walker’s home hangs a framed tribute to his brother, Harvey, who was killed in action on the Island of Luzon in the Philippines, while serving as a member of the Air Corps in the South Pacific

Bert, the oldest of the brothers, served in the Army as an infantryman and was part of the Normandy invasion. “Bert and I got together in France one time when our units were near each other,” Walker said. Bert is now deceased.

Harold also served in the Army in Europe. “I met Harold near Salzburg toward the end of the war,” Joe said. Harold was a Dresden resident until his death in 1992.

Two of Walker’s other brothers – Hilman, a resident of Memphis; and Raphael, of Martin are veterans of the Korean Conflict. Both are still living.

Soon after WWII started, Joe and his future wife, Verna Mae Cavin, both went North to work. Verna was employed at a factory in Chicago, and Joe was working in Michigan. They had kept in touch while they were working up North and had corresponded throughout the war.

After his military service ended in 1946, Walker returned to Martin. Joe and Verna were married on January 10, 1946 – just three days after he returned home from military duty.

In 1951, Walker’s building and maintenance experience in the military helped land him a job at the University of Tennessee at Martin, where he was in charge of heating, air conditioning and plumbing operations.

He left UTM for a couple of years and worked as maintenance supervisor at the newly-built Volunteer Hospital in Martin.

Joe and Verna were married 69 years when she passed away in 2015.

Mr. Walker’s daughter, Shelia, takes care of her father during his twilight years.

In Memory of the 163rd Engineer Combat Battalion

Several years ago, Herman P. Shutt, who was a member of the 163rd, built a scale model of one of the bridges and donated it to the Barnett Museum (also known as The Backyard Town Museum) in Martin. This is where Shorty Barnett, who was another member of the battalion, lived and operated the museum.

After Shorty died, his wife, Modine and son, Mike, kept the museum going for a while. But after Mike died, Mike’s wife, Cathy, called Walker and told him to come get the bridge to keep it for members of the battalion.

Walker’s daughter, Shelia, said, “We are thrilled to see this special artifact on display. It gives honor to not only my dad, but to all the members of the 163rd Engineer Combat Battalion.”

In reference to the special recognition he has received over the years, Walker said, “I appreciate everything everybody has done for me.”

The WWII veteran and staunch patriot said, “This country is one of the greatest there ever was. I appreciate it very much.”