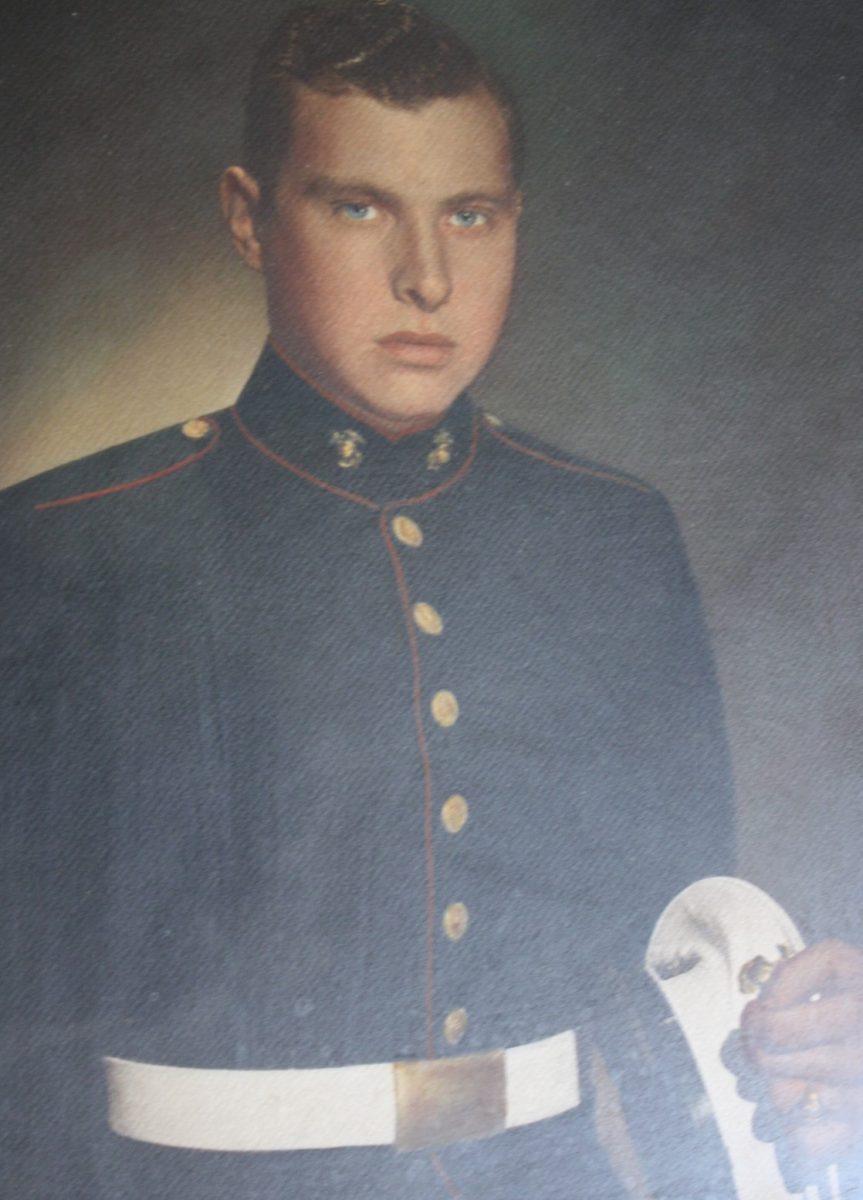 Mr. Pritchett, 94, who resides on Evergreen Street Extended in Dresden, reflects on the 47 years he spent sailing the world’s oceans while serving in the Merchant Marines.

Carmon Pritchett was born on September 28, 1927, to John Otis Pritchett and Clara Parham Pritchett. He grew up on his family’s 120-acre farm in the Dresden community, where he still lives to this day.

His only sibling was a brother named Otis Dean Pritchett, who died in 2001.

“Maurine Campbell was in my class, and when we graduated 12 years later, we were the only ones still there,” he said.

His involvement in school sports involved playing on the football team during his senior year.

The day after Carmon graduated from high school in 1945, he traveled to Birmingham, Alabama, and joined the Merchant Marines. “I went to St. Petersburg, Florida, for basic training, and qualified to go to radio operator’s school. We went to Washington, D.C. and worked two weeks at the Merchant Marines headquarters.”

Pritchett’s maritime service included being a member of the United States Merchant Marines from May 29, 1945 until April 1, 1947. He also served in the United States Marine Corps from January 15, 1947 until January 14, 1950. Additionally, he held the rank of Sergeant while serving with Headquarters Company, 143 Infantry Regiment, Texas National Guard.

Pritchett was an accomplished ballroom dancer. “While stationed at Quantico, Virginia, I hitch-hiked into Washington, D.C., and went ballroom dancing every night,”

He was also temporarily stationed at Hoffman Island, New York.

Pritchett attended “low-speed radio-operating class” in Oceanside, California, while serving in the United States Merchant Marines. He notes the school took five months to complete, and those graduating successfully from the course were required to send a minimum of 16 words per minute with a radiotelegraph key, and he managed to send 18 words per minute. The fast-speed class, which he never took, required 24 words per minute.

During Pritchett’s years in the Merchant Marines, he served as the ship’s navigator and cargo officer, and was stationed either at New York or New Orleans and transported cargo to ports of call all over the world. The ships he served on generally had a little less than 50 crewmembers. As cargo officer, it was his job to make sure the heaviest cargo was stored in the bottom of the ship, because if the heavier cargo were stored on top, the ship would capsize.

He noted, at the end of WWII, the United States was the only nation in the world that had very many ships left, because most of those from other countries were sunk during combat at sea.

“We shipped cargo to all of the countries of Europe, South and East Africa, Japan, China and Australia,” Pritchett said. He also made numerous trips to Pearl Harbor, Hawaii and sailed to Tahiti in French Polynesia.

He recalls a voyage in 1946, when his ship went to Yokohama, Japan, and then on to Shanghai, China. “The port in Shanghai was congested and we were four weeks waiting for a dock. It took us two weeks to discharge our cargo.”

“I went to work for the Military Sealift Command in Seattle, Washington. My first trip was hauling 1,500 troops to Korea. We sailed from Seattle to Adak, Alaska, to fill our fresh water tanks, then on to Honolulu, Hawaii, where we filled our fresh water tanks again, to get ready for our voyage to Yokohama. We discharged the troops in Yokohama and picked up troops that had already been processed and transported them to Korea.

His ship dropped anchor at every port in the Mediterranean and off-loaded general cargo.

“I visited Germany for the first time in February of 1946, when we made port at Hamburg, Pritchett said. “I also visited Bremerhaven. The war had been over for seven months, and the city had been bombed out. Only 10 percent of the buildings were left.”

He recalls the first trip to the region involved transporting 300 boxcars of Idaho potatoes from Providence, Rhode Island, to Antwerp, Belgium. There was very little food for the people of Europe at the time, and most of the cargo went inland to feed the hungry.

On another trip, Pritchett stated his ship, the “Pioneer Surf,” sailed from New York, through the Panama Canal, and made port in Brisbane, Australia. He also docked in Sidney, Australia.

“I fell in love with a pretty girl in Australia,” he recalled.

His first job was as an ordinary seaman, and after three years, he took the test to become an able-bodied seaman. Later he was promoted to third officer, then second officer, and finally first officer. He spent much of his free time studying until he received his master’s license.

Pritchett recounts an adventure he had at sea in 1946, while aboard a cargo ship that was 400 ft. long and approximately 48-feet wide. He said the vessel was off the coast of South Africa when it was pounded by the biggest storm the region experienced in 15 years. “We went aground,” he said. “I did everything I could do to try and convince the captain we were aground and needed to get the ship free. If we waited too long, there wouldn’t be another high water for 14 days. But the captain could not be convinced and it was 14 days before we could get the ship off the beach. The captain eventually realized the ship had went aground, and told me the reason he didn’t believe me was because I was so calm. Fortunately, the ship wasn’t damaged. The crew went ashore during this time, and sometimes the tide would change and the crew would have trouble getting back to the ship, due to huge waves. We heard them scream when they thought they were going to drown. Fortunately, we didn’t lose anybody.”

Pritchett learned to speak Spanish while attending college in Mexico City, Mexico, in the early 1960s. I would go the college one semester and work the next, so I was in college about half of the time.

Pritchett received several certificates of accomplishment and medals for his many years of dedicated service to his country.

He retired from the Merchant Marines in 1992, when Lykes Bros. Steamship Company, which was the company he worked for since the early 1960s, went out of business.

When asked what he liked best about his time as a Merchant Marine, he replied, “I got paid about three times as much money as anybody was making here.”

Although he was at sea quite a bit, he spent about half of his time on vacation with his family.

Pritchett is married to Lauria Hjorfrid Pritchett, who is from Iceland. He met Lauria in the early 1960s while in Reykjavik, Iceland, which bears the distinction of being the world’s northernmost capital. A year later, they were wed. The couple’s children are Andrew, Richard and John.

Andrew works as a juvenile probation officer and has served in the Tennessee Army National Guard for a number of years.

Richard drives a 14-wheeler for FedEx.

John, who followed in his father’s footsteps, is a sea captain on Chesapeake Bay working for the Military Sea Command. “John did not have to pay to go to college. He went to the Merchant Marine Academy for four years,” Mr. Pritchett said. “The U.S. government spent $400,000 educating John.”

The Pritchetts also have seven granddaughters and one great-grandson.

As for religious affiliation, Carmon is a member of First United Methodist Church in Dresden.

Concerning hobbies, Pritchett says he does a lot of reading these days. “I like ‘Time’ Magazine, because it brings me up to date on all of the news around the world.”

Carmon and his wife, Lauria, still reside at his family’s homestead on a five-acre lot. The remaining 115 acres has been sold off over the years.

He enjoys spending his golden years with family and friends, and recollecting his many seafaring adventures at distant ports around the world.