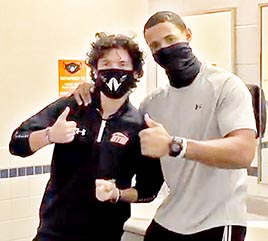 MARTIN (October 27) – Though the Skyhawks aren’t visible on the gridiron this fall, the University of Tennessee at Martin football team is certainly scoring points with Martin Elementary School (MES).

The UTM football program has partnered with MES for more than a decade, School Counselor Amy Tuck explains. Roles have included serving as mentors for students that needed an extra friend at school, overseeing games and distributing candy prizes at Family Fun Night, and reading books during Family Reading Night. Classrooms have also adopted players for interaction.

With their season postponed, the team is still practicing and attending classes. But they found they had additional time on their hands. After a brief huddle, they asked their coaches if more community service might be possible.

Head Coach Jason Simpson contacted MES and asked if there were areas that his players could be of help. Unfortunately, safety precautions due to COVID-19 meant face-to-face visits at the school were not in the game plan for 2020.

However, football teams are quite familiar with reviewing film. So the Skyhawks tackled the problem using what they know. They suggested producing video clips at UTM that could be shared with the young students on the MES campus.

Simpson offered his film crew for filming and editing. Assistant Coach Jay MacIntyre, who has a degree in communications, was charged as the liaison between the team and the school.

To date, the team has produced two videos. The first featured key players sharing the message of staying strong to fight COVID-19 by being supportive, careful, alert and kind.

“This was a creative approach of reinforcing proper handwashing, wearing masks, and social distancing,” observed Tuck. “It was good for students to hear this information from someone different that school faculty and staff.”

The second video follows a similar approach of players looking directly at the camera and offering “shout outs” to the STAR students for the month. STAR is a character-building incentive program that recognizes Students That Act Responsibly.

Traditionally, STAR recognitions involve the entire student body gathering in the gym for certificate presentations. The new videos are customized messages to the students by name and offering thumbs up and words of praise from the team.

“Martin Elementary School would like to return a shout out to UTM football for using their creativity and giving of their time to continue interacting and serving our school community,” said Tuck.

Simpson says the impact has been “immeasurable from both sides” during a “unique and tough situation unlike we’ve experienced in college athletics, schools, and with our families.”

During his 15-year tenure, the team has always been ready to respond to requests from local schools, but this year, as the young men have found new ways to connect, he says the giving back has brought a sense of normalcy and growth.

“Some of the kids here have some of their own troubling times they’ve been through. But when they give of their time, whether we mandate it or they volunteer, they grow from it. Their grades improve. We all gain from each other,” he concluded.

MacIntyre, who Simpson points out is part of a three-generation coaching legacy at UTM, notes that while the videos are “fun to make” he’s also glad the team can help give back to the community.