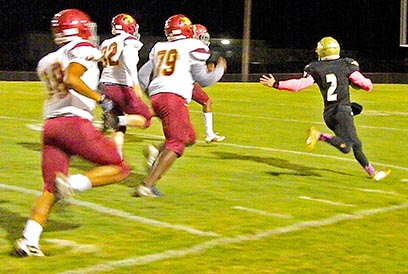 Dresden’s Chandler Turnbow attempts to get the first down while outrunning a herd of Humboldt Vikings.

The game started with Humboldt receiving the ball and almost making a touchdown, but fumbling and giving the Lions a touchback. The Lions were met with a strong Vikings’ defense and were unable to make a first down. The first quarter ended with neither team scoring.

Dresden began the second quarter with Tatum Oliver recovering his own fumble and Humboldt later doing the same. The Vikings were able to break through Dresden’s defense for a touchdown, which put the game at 6-0. Dresden responded with Chandler Turnbow making a 25-yard run for a touchdown that tied the game 6-6 at halftime.

The second half was difficult for the Lions, who were not able to break through Humboldt’s defense for a first down. The Vikings scored two more touchdowns, one in the third and one in the fourth quarter, which had Dresden behind 20-6. The Lions were able to score a touchdown with Oliver making a run, but the game ended soon after and the Lions fell 20-12.

In this game there were a total of seven turnovers combined with Dresden suffering two fumbles and throwing two interceptions. Oliver finished with 139 passing yards and Turnbow with 154 rushing yards.

After the game Head Coach Wes Johnson said this about the game and the upcoming playoffs, “End of the day, we get it down there, we got to score … We need to get healthy; next week we are going to get healthy and work on our game plan and its win or go home from here on out.”

Dresden will travel to Lake County Friday, November 13, for the team’s first game of the playoffs.