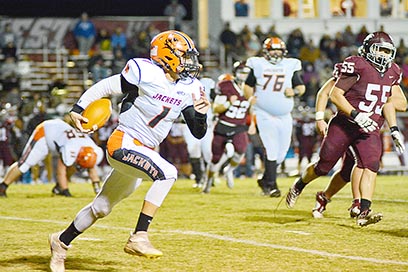 ALMOST UNDEFEATED – The Greenfield Yellowjackets football team had its first loss of the season as they faced off against West Carroll Friday night in the team’s final regular-season game. The undefeated Jackets were shut out by a score of 18-0. West Carroll had two touchdowns in the second quarter, and again in the third quarter, for the team’s 18 total points. Greenfield suffered two turnovers in the game. Senior quarterback Baker Porter (ABOVE) had 29 passing yards and Hayden Smith finished with 36 rushing yards, the most for the team. The Jackets had a difficult game against West Carroll, but the Jackets look to not repeat this in the playoffs. Greenfield faces West Carroll in the playoffs Friday, November 13, at Greenfield. Photo by Amee Hayes