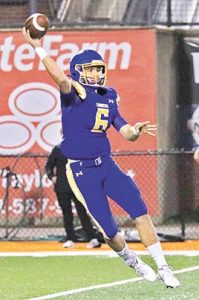 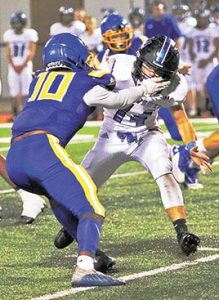 Westview Charger Omarion Harris was one of the team’s lead defenders Friday, October 23 against Waverly with 11 tackles and two pass break ups. Photo by Clinton Smith

The Chargers completed Friday’s game with Marquis Taylor rushing for 158 yards, 13 carries, and one touchdown. Ty Simpson ran for two touchdowns as well, including a 20-yard touchdown early in the fourth quarter. Simpson also had 124 passing yards for one touchdown and throwing one interception. Receiving the most was Marquis Taylor for five catches, while Javion Goins caught for 33 yards and one touchdown in the first quarter.

The Chargers’ defense worked hard to stop Waverly with more than 100 tackles by the team overall. Marquez Taylor totaled 11 tackles, 2 solo tackles and two quarterback hurries. Javion Goins had six tackles, one for a loss, and one interception. Omarion Harris had 11 tackles, 1 for a loss, and two pass break ups. Marquez Taylor completed the game with 11 tackles, three solo and two quarterback hurrys. Hayden Smith totaled the most individual tackles with 13 tackles and four solos.

The Chargers’ special team had JT Carver go 4-for-4 in extra points and four touchbacks. Punting was Jackson Abel with three total, which averaged 47 yards.

With this win, the Chargers now stand at 7-3 for the season as they get ready to play their last regular game of the season at Milan Friday, October 30.