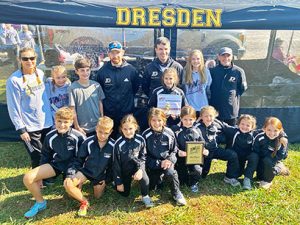 KNOXVILLE (October 17) – Elementary and middle school cross-country teams from all over Tennessee traveled to Knoxville to participate in the Tennessee State XC Championship. Two area schools participated in the race, Dresden and Greenfield. All who finished in the top 30 overall did receive individual trophies.

For the Elementary School Championship, Dresden had two boys participate, with fourth-grader Cannon Floyd coming in 29th place overall at a time of 6:08. Teammate Miles Cary came in 107th at 6:44.

Dresden’s Elementary team had fifth-grader Bailey Warbington come in 22nd with a time of 6:13 and fourth-grader Irah Cianfarani coming in 35th at 6:44.

Jillian Gallimore and Harley Taylor both finished in the top 100 overall at 71st and 91st respectively. Coming in 115th was Maggie Robinson and at 167th was Kinsley Smith. Last for Dresden’s Elementary team finish was third-grader Liv Killebrew, who placed 202nd.

In the Middle School Championship, Greenfield Middle School saw Brenley Little come in 20th place overall at 12:22. Also finishing for Greenfield was Hallie Trevathan at 76th with a time of 13:21. Jolie Lunsford came in 150th and teammate Hallie Williams finished in 187th.
Running for Dresden in the girls’ race was Ellie Poole, who finished 35th at 12:40. Alivia Rainey placed 138th with a time of 13:57 and Alexis Harrison finished at 167th at 14:13.

Landon Floyd of Dresden ran in the boys’ championship race and finished in 95th place with a time of 12:12.

The state championship race marks the end of the cross-country season for the year.