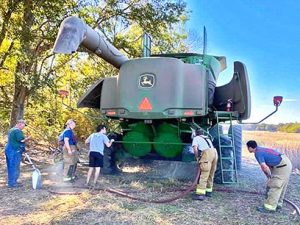 WEAKLEY COUNTY (October 21) — Dresden and Sharon fire departments had a very busy day with multiple callouts last week, with the eve of required burn permits being one of their busiest days.

According to Dresden Fire Department Capt. Kory Green, Dresden firefighters were dispatched to several fires within their response zone and provided mutual aid to Sharon in extinguishing a combine fire.

Three Dresden Fire Department personnel arrived at the scene with a couple of fire engines.

Firefighters reported no visible smoke from the exterior. Upon entering the residence, heavy smoke was discovered throughout the apartment. However, no active fire was visible. The apartment was one of four in the building.

All residents in the apartment complex were evacuated until the fire was extinguished. Upon further investigation, it was determined an unattended skillet with cooking oil on the stove had ignited.

The resident, Joanna Campbell, states she was in the bathroom when she heard the smoke alarm sounding. Campbell said when she entered the kitchen, fire was “rolling” above the cooking skillet into the stove’s vent hood.

There was black smoke damage to the vent hood. Fire damage was limited to the cooking area of the stove.

Campbell put on cooking mitts and carried the skillet outdoors. Weakley County EMS was on the scene and reported the resident did not suffer any injuries.

An exhaust fan was used to ventilate smoke from the apartment.

Firefighters utilized a thermal imagery camera to check for hot spots, but none were detected. After multiple inspections with the camera, it was determined there was no fire danger.

At approximately 12:16 p.m. that day, a Dresden firefighter received a call from a concerned citizen, reporting smoke coming from beneath the Mud Creek Bridge on Highway 118, just inside the Dresden city limits.

Dresden firefighters responded to the scene with a fire engine and brush truck, and discovered light smoke coming from underneath the bridge.

Two Dresden Police officers at the scene informed Dresden Fire Department personnel that several juveniles, who were out on fall break, had built a small fire under the bridge and were cooking food. Police counseled them about the City’s regulations regarding having an outside fire and the dangers of unsupervised juveniles starting fires.

The firefighters quickly extinguished the small fire by utilizing the water supply on the brush truck. Once there was no longer any fire danger, all personnel returned to the fire station at 12:22 p.m.

Dresden Fire Department was dispatched to an outdoor fire on Tucker Road at 1:57 p.m. on Wednesday, October 14. Sharon Fire Department and Tennessee Division of Forestry personnel were also called out to the same location.

Six Dresden firefighters responded to the fire with a fire engine and brush truck.

While still fighting the blaze on Tucker Road, Dresden Fire Department was paged out for a second incident on Highway 22 involving a farm implement fire. Dresden’s fire engine was diverted to the tractor fire, while their brush truck and personnel continued to provide mutual aid to Sharon Fire Department and Forestry at the Tucker Road blaze.

The brush truck began fire suppression of one area of the crop-field fire. Approximately 200 gallons of water and were used in suppressing the blaze. The fire was extinguished and Sharon Fire Department cleared Dresden Fire Department from the scene at 2:31 p.m.

At approximately 2:27 p.m. on Wednesday, October 14, the Dresden Fire Department was dispatched to 10864 Hwy. 22 Dresden, in reference to a vehicle fire.

When Dresden Fire Department personnel arrived on the scene, they notified dispatch a baler, chopper tractor was fully involved.

The flames also sparked a field fire, however, less than an acre was burned during the incident.

Once the initial fire was knocked down, three additional units began relay pumping. Shortly after the fire was out, Dresden firefighters notified dispatch that they would remain on the scene for overhaul and cleanup.

During a post fire investigation, Dean Maxey of Palmersville, who owns the tractor, stated the fire ignited while he was cutting hay. He told Dresden Fire Chief Paul Hutcherson he believed an electrical issue in the engine compartment was the cause of the fire, since that is where he first saw the flames.

The cause of ignition was determined to be equipment failure or heat.

The owner of the tractor was billed for the cost of the call and one section of contaminated hose after getting a price quote.

The land where the incident occurred is owned by Billy Austin of Dresden.

At approximately, 11:07 a.m., Friday, October 16, Dresden Fire Department was dispatched to 811 Morrow St. in reference to an outdoor fire spotted at that location.

Upon arriving at the scene, firefighters discovered there was just a small area of smoldering mulch. The fire was quickly extinguished and firefighters cleared the scene at 11:20 a.m.

The cause of the fire is undetermined.

Chief Gary Eddings said, shortly before 1 p.m., on Wednesday, October 14, Sharon Fire Department responded to a fire in the median of Highway 45 at the intersection of White Clay Road with five personnel and three pieces of firefighting equipment.

“By the time we arrived at the scene, the fire had spread almost to Bob Short Drive, due to the gusty winds and dry conditions,” Chief Eddings said. “When we arrived back at the Sharon Fire station to refill our tanker truck with water, we received another call reporting a combine and bean field were ablaze on Tucker Road, just off Lower Sharon Road.”

According to Chief Eddings, Sharon firefighters concentrated their efforts on extinguishing the combine fire, while Dresden firefighters and Tennessee Division of Forestry personnel put out the bean field fire.

Eddings said, “By the time Sharon firefighters returned to the station and got the equipment cleaned up, it was shortly after 4 p.m.”

Rural residents are required to obtain a burning permit from the Tennessee Division of Forestry now through May 15. Citizens residing inside the city limits of municipalities are required to follow local guidelines regarding outdoor burning.