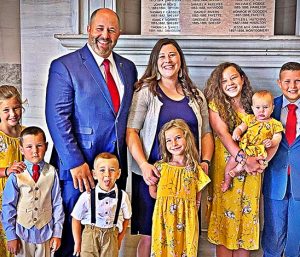 DRESDEN (October 21) — Knoxville native Andrew “Andy” Holt (R), who represents the 76th District in the Tennessee State House of Representatives that includes Weakley, and a portion of Carroll and Obion counties, decided earlier this year not to seek another term of office in the state legislature. He recently reflected on his time in the State House and discussed his future plans.

Holt explains he never intended to be a career politician, and after 10 years in office, he decided to step aside. The 38-year-old State Representative says he is leaving office in November following the General Election.

“It was a real honor to have the opportunity to serve for 10 years, especially since I was elected at the age of 28,” Holt said. “Looking back, I feel like I was pretty young when I went into that role. I feel I achieved a number of things I wanted to accomplish.”

Additionally, Holt stated he feels like his role has been as a gatekeeper, preventing undesirable legislation from getting passed. This includes voting against legislation “that would cripple the average person from exercising his or her rights.”

Throughout his tenure, he has served as Chairman of the Finance Ways and Means Subcommittee, Chairman of the Agriculture and Natural Resources Subcommittee and a member of numerous committees including: the Select Committee on Rules, Council on Pensions and Insurance, and Education Instruction and Programs. He is also the planning committee Chairman of the annual Ag Day on the Hill event.

Regarding leaving office, Holt says, it was a decision he and his wife, Ellie, made together. “We decided to go into this together and I think both of us are very comfortable with that decision. I felt the Lord’s call to go and serve and his call to release me from service. We’re very excited about it. It’s going to open up some opportunities we’ve been wanting to do for the last several years.”

Holt said, “We sold our 120 acre farm on Jewell Store Road and are living on the 30-acre farm Ellie and I first bought and are in the process of building a house there.” The farm is located on Woodruff Road between Dresden and Palmersville. However, they plan to purchase a larger farm somewhere in Weakley County in two or three years.

They own and operate Holt Family Farms in Weakley County and host an annual pumpkin patch in the fall where local community members and schools visit and further their agricultural education. However, he noted things are going to be a little different this year when it comes to school field trips to the farm, due to the COVID-19 pandemic.

“We have a number of plans to improve our agritourism operation, diversify our current farm and engage in other business opportunities,” Holt said.

One of the changes planned is to expand raising crops during a single season to having crops year round. This will create other opportunities at the farm for people to interact with agriculture. Plans call for expanding learning trips to the weekend and offering parents and grandparents an opportunity to get involved.

In addition to farming, Holt is a businessman, and an adjunct instructor of Business, Government and Economics at Bethel University.

The Holt family attends Long Heights Baptist Church in McKenzie, where Holt serves as a deacon.

“From a leadership perspective and financial perspective, I’m really proud of where we’re at right now,” Holt said. Holt says Tennessee is experiencing one of the strongest economic recoveries in the nation in the wake of the COVID-19 pandemic. He said those wishing to get out and do something after being cooped up during the pandemic, can take advantage of Tennessee’s state parks, which are free to the public.