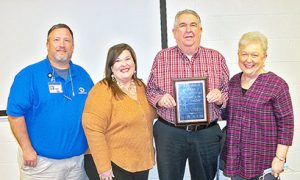 Greenfield Alderman Paul Grooms was presented with a plaque honoring him for his many years of service during Tuesday night’s meeting of the Greenfield City Board. He is pictured with family members (L to R) son-in-law, Brad Borneman; daughter, Jennifer Borneman; Paul Grooms; and his wife, Iva Grooms.

GREENFIELD (October 13) — Mayor Cindy McAdams and other Greenfield Board members congratulated Alderman Paul Grooms for 29 years of service to the City of Greenfield, during Tuesday’s regular monthly meeting. The mayor also recognized aldermen Mike Caudle and Karen Campbell, who were appointed to serve on the board to fill the unexpired terms of former aldermen Shane and Jan Johnson.

Grooms was given a plaque that reads: “In appreciation of his 29 years of service, devotion and commitment to the City of Greenfield, 1991 – 2020.”

Mayor McAdams said, “Paul has done a good job and we appreciate it.”

Alderman Caudle, who served on the board several years prior to his most recent appointment, said, “I appreciate the opportunity to serve on the board, and for being appointed.”

Looking to future improvements, Caudle said water and sewer infrastructure needs to be installed along McKenzie Highway 124, as grants become available. He also asked the board to reconsider holding a referendum regarding the number of aldermen serving on the board. The referendum would determine if the board should be reduced from eight to six members. Addressing the board, Caudle said, “I thank you all for your cooperation, dedication and willingness to serve. It’s a thankless job.”

Alderman Bobby Morris also commended Alderman Grooms for his faithful service and noted it was because of him, he decided to become involved in city government. Additionally, Morris said he appreciates Alderman Caudle for returning to the board when he was asked to do so.

Alderwoman Karen Campbell, who was unable to attend Tuesday night’s meeting, said, “I believe in giving back to my community, and I’m pleased to have been of service in some way. I plan to continue serving in other ways to help with the economic development our area. I appreciate the opportunity to have seen how city government works.” Campbell’s full-time job is communications director for the Weakley County School System.

Caudle and Campbell are not running to retain their seats on the Greenfield Board in the November 3, 2020, election.