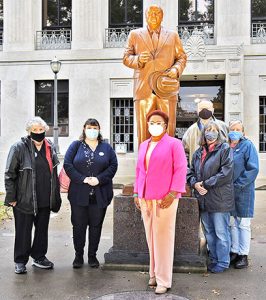 DRESDEN (October 15) — Members of the Weakley County Democratic Party gathered at the Weakley County Courthouse Thursday afternoon to celebrate the birthday of former Tennessee State Representative and Governor, the late Ned Ray McWherter. On October 15, McWherter would have been 90 years old. U.S. Senate candidate, Democrat Marquita Bradshaw of Memphis, joined the group in the birthday celebration and spoke about her candidacy for Senate. Governor McWherter’s daughter, Linda Ramsey of Martin, also spoke about the legacy her father left behind in working across the aisle and bringing great progress to the State of Tennessee during his tenure in office.