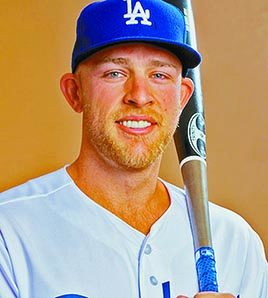 DRESDEN (October 18) – The Los Angeles Dodgers baseball team rallied from a 3-1 National League Championship Series deficit to beat the Atlanta Braves, sweeping the playoffs Sunday evening. Among those in Arlington, Texas, for the World Series is Dodger and Dresden alumnus Matt Beaty.

Beaty graduated Dresden High School in 2011, where he played baseball four years, football his sophomore year, basketball four years and golf his freshman, sophomore and junior years. The all-around athlete was chosen as an All-State player as a freshman, junior and senior.

Beaty made his debut in the major leagues for the team as a pinch-hitter April 30, 2019.

The 27-year-old in-fielder is cheering with his team in Texas this week as the Dodgers battle for the title of World Champions against the Tampa Bay Rays.

Beaty is a second-year player for the Dodgers.

Game dates and times for the World Series are as follows: