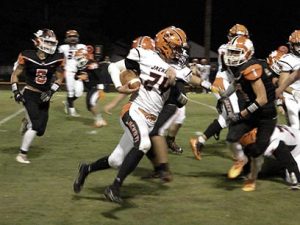 Greenfield’s Hayden Smith takes the ball through Gleason’s defense to a first down for the Jackets. Photo by Jasmine Williams/The Enterprise

GLEASON (October 16) – Gleason and Greenfield high schools have had two very different football seasons this year, with Greenfield coming into Friday’s regional game 6-0 for the season, compared to Gleason’s 0-6.

In Friday’s game at Gleason, both teams continued their seasons with Greenfield taking home another win and Gleason falling 42-28.

The game started with Greenfield’s Hayden Smith making a touchdown and the team failing on the two-point conversation. The Bulldogs responded with an 80-yard pass and run from Drake Lehmkuhl, which tied the game at 6-6.

Greenfield was able to take the lead before the end of the first quarter when Smith scored another touchdown from the two-yard line.

Smith continued this momentum in the second quarter scoring two more touchdowns and bringing the Jackets’ lead to 28-6. The Bulldogs were struggling to make many major plays in the game and appeared they would go into the halftime with one touchdown. However at the end of the second quarter with less then two seconds to go, Gleason was on the two-yard line. Elijah Young ran the ball for a touchdown at the end of the quarter. Gleason then made a two-point conversion. The Bulldogs did not take the lead, but showed they had some fight left in them with the score at 28-14 at the half.

In the third quarter, Gleason started with the ball, but could not break through the Jackets’ defense for a first down. Greenfield took the ball down the field to the eight-yard line where the ball was fumbled and recovered by Kiah Keynolds. The Jackets made up for this mistake by scoring a touchdown the next play and increasing the lead to 36-14. Gleason was unable to prevent Greenfield from making another touchdown near the end of the third quarter with the score at 36-20.

In the fourth quarter, Greenfield continued to score with Will Harris making a 25-yard-run touchdown. But Gleason still had one last push in them, finally breaking through Greenfield’s defense to make it to the one-yard line. Young scored the final touchdown of the game and taking the score to 42-28 at the final.

Greenfield’s Head Coach Don Pitt said he was very proud of how the offense played in Friday’s game with it being the best they have preformed all year. Coach Pitt also said the next two games coming up for the Jackets will be some of the more important games this season.

Gleason’s Coach Noah Lampkins noted the team would need more improvements before they can face off against Dresden. Lampkins said the team needs to improve most in tackling and taking players outside of their comfort zone.

Gleason High School remains in the county as they play against Dresden Thursday night while Greenfield travels to Lake County. 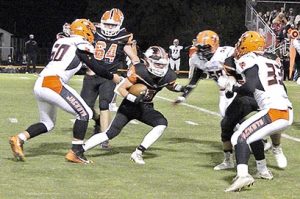 Isaac Denton of the Gleason Bulldogs football team carries the ball for a short gain. Photo by Jasmine Williams/The Enterprise