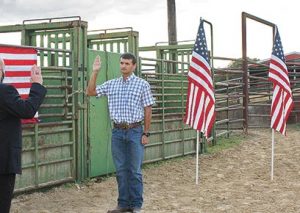 MARTIN (October 2) – On a plot of land in rural Martin, American flags stood tall in front of the backdrop of cattle gates and fencing that is used for members of the University of Tennessee at Martin Rodeo Team to practice and refine their skills. Typically, one might see lassos, cattle and horses within the fence, but on Friday, October 2, a handful of people witnessed a different side to Rodeo standout Robert Haley.

That afternoon, Martin Army recruiter Sgt. First Class Jeff Steinman, along with Rodeo Team assistant coach Nelson Davis, buried pipe holding American flags into the dirt floor of the arena. Those flags served as the backdrop for two enlistees who were recently accepted into the US Army. The recruits weren’t just typical soldiers. The pair were accepted and guaranteed candidates for Warrant Officer Flight Training and upon completion of basic training, their schooling will train them as pilots in the United States Army.

Haley, who is a 2020 graduate of UT Martin and member of the university’s rodeo team, said he had always been interested in service in the military. He has family members who enlisted and once Haley knew he was going to be guaranteed a slot as a pilot, he said he is able to fulfill his dream of being an Army Aviator.

It is a rare occasion to be able to offer a recruit candidacy for Warrant Officer Flight Training, but in this case, Steinman worked to recruit two candidates who are bound for the pilot’s seat. The second recruit is a Class of 2020 graduate of Dyersburg High School, Derick Figueroa.

Figueroa and his family traveled to rural Martin that day as he took his oath of enlistment within the ring of the training center.

The pair were sworn in on a sunny, fall afternoon. Steinman said he wanted to make the experience something special for his recruits.

Beyond scoring well on the military’s ASVAB tests and displaying above average physical ability, the two had to compile packets that highlighted their academic achievements, recommendation letters and create resumes to be presented by Steinman to the recruiting command panel, who would make the final decision to allow the candidates into WOFT.

Steinman worked with all entities to ensure Haley and Figueroa fulfilled their dreams of becoming pilots. As a recruiter, Steinman demonstrated patience and diligence in completing their applications for approval.

Three days after Haley and Figueroa took their oath of enlistment in rural Martin, Steinman completed his final enlistment with the United States Army, having been in service for 14 years. 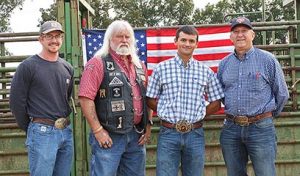 On hand for Robert Haley’s oath of enlistment into the United States Army that took place outside of Martin at one of the training sites for the UT Martin Rodeo Team were coaching staff members (L to R) Robbie Van Holten, Nelson Davis, Haley and head coach John Luthi.