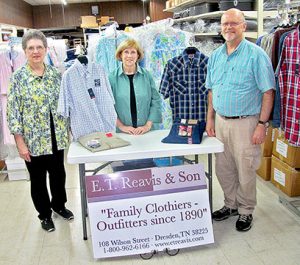 The co-owners of E.T. Reavis and Son Dry Goods are (L to R) Carol Reavis Moore, Martha Reavis Killebrew and Tom Reavis. The siblings are carrying on a tradition the Reavis family started more than 100 years ago, when the store first opened for business. The store is located on the square in downtown Dresden.

DRESDEN (October 14) — The City of Dresden, which serves as the county seat, has a long and storied past. The city was incorporated in 1825 and later expanded in 1843.

Local merchants and industries have played an important role in the town’s commercial development over the years. From the days of the horse and buggy to modern automobiles, businesses evolved to cater to changing technology, tastes and trends.

The oldest Dresden business continuously in operation by the same family is E.T. Reavis and Son Dry Goods.

“We’ve been around awhile, Pap (E.T. Reavis) came to Dresden from his home on the family farm just southeast of Dresden about 1890 at the age of 21,” Tom Reavis said. “The Reavis family has been in northwest Tennessee since the early 1800s, having come west from the Carolinas. Pap was employed by Charlie Cottrell as a clerk in a dry goods store. Now I don’t know if it’s a fact or not, but mom and dad told me that he spent his nights in the back room of the store on a cot. Of course, the walk back home every night would have been pretty tough, so, I guess it’s true. Along about 1895, Pap went into business for himself.”

The firm opened under the name Reavis and Mayo in 1895. It was renamed Reavis and Duke, and later Reavis and Loyd (his brother-in-law). Their son, Loyd Reavis, grandson Loyd Reavis, Jr., and great-grandson Thomas Loyd Reavis, have continued serving the community for more than a century. Around 1920, the business became known as E.T. Reavis and Son and remained under that name since.

Originally located in the building once occupied by Alexander and Chandler Pharmacy and Bob’s Pharmacy,

E.T. Reavis has been at its current address on the corner of Wilson and Main streets for the past 100 years. The Reavis family purchased the building at the previous location in 2008.

“Every generation since E. T. Reavis has been involved in the business,” Tom Reavis said. “My grandfather (Loyd L. Reavis, Sr.) and father (Loyd L. Reavis, Jr.) and mother (Dorothy H. Reavis) were involved in the daily operations until their untimely deaths at early ages. The business is currently co-owned by Tom Reavis, Martha Reavis Killebrew and Carol Reavis Moore. Martha and Carol are retired teachers who formerly taught at Dresden Middle School.

“I’m the “baby” in the family,” Tom said. “Carol, the middle child, is the bossy one. Martha and I usually jump when Carol tells us how high. Seriously, they’re good gals and I appreciate and love them very much. I could not run the place without them.”

E. T. Reavis began selling merchandise through its internet site in 2000, which has proved to be a very wise decision, since approximately 90 percent of their business is now online.

Martha Killibrew says of the family business, “We receive orders from coast to coast. We ship to Maine, California, Hawaii, Alaska, Puerto Rico and the Virgin Islands.”

Tom says he appreciates the many loyal customers who shop at E.T. Reavis, whether it be in person or online. “You are the reason we’re here and have been for over a century,” he said.

E.T. Reavis started the family dry goods store business, which has continued until the present, as it has been passed on from generation to generation. 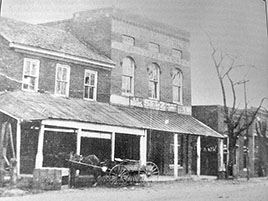 The original location of the E.T. Reavis and Son store prior to 1920 is depicted in this old photograph.