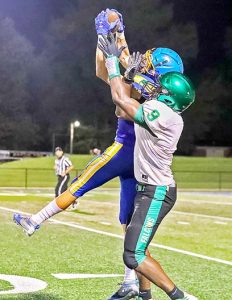 Westview Charger Garner Anderson picked off a pass intended for a Lake County Falcon receiver during Friday’s match up at Hardy Graham Stadium Friday night. The Chargers’ defense only allowed Lake County to earn 22 points against Westview’s 62 that night. Photo by Christel Thompson

MARTIN (September 25) – Westview’s offense and defense were unstoppable when they took to the field at UT Martin’s Hardy Graham Stadium in their Homecoming game against the Lake County Falcons Friday night.

Charger JT Carver started off the game with a touchback when he kicked the ball to the Falcons. Starting out on the 20-yard-line, Lake County struggled to get down and gave the ball to Westview one minute and 40 seconds into the game.

Westview took no time putting the points on the board when quarterback Ty Simpson launched a pass to Javion Goins who scored a touchdown on the second play of the Chargers’ possession.

With plenty of action only in the first few minutes of the game, it would be recurring throughout the game as the Chargers continued to hold Lake County and put their own points on the board.

Westview recovered an onside kick after earning its first points, but a Falcon picked off Simpson’s pass early on. Lake County’s offense suffered a quick series of tackles before handing the ball back to Westview.

The team used its offensive duo for a second time with Simpson launching a pass to Goins, who scored a second touchdown.

As Lake County made its way back down the field looking to score, a pass in the end zone was picked off by Quincy Hamilton. Westview had to give up two points to Lake County after the interception when the team was penalized for intentional grounding. The score at the end of the first quarter was 14-2.

The second, third and fourth quarters saw more of the same action with the Chargers continuing to put points on the board throughout the night. By the end of the match up, Westview had racked up 62 points against Lake County’s 22.

Leading the defensive line Friday night in tackles were Hayden Smith with 9, Ashton Carter with 7, Drew Shanklin with 7 and Marquez Taylor with 5. Lane Pierpoint and Goins both picked up 4 tackles.

Westview will take on South Gibson in a District 13AA game Friday, October 2, 2020 at Hardy Graham Stadium. Kick off is a 7:30 p.m. Tickets can be purchased at Westview High School each day during school hours, until 2:30 p.m. They will not be sold at the gate. Tickets are $6 each. 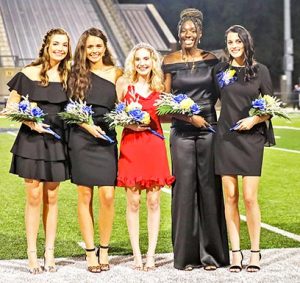