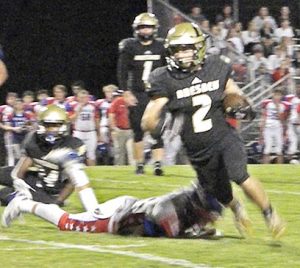 Dresden Lion Chandler Turnbow put the first points on the board during the Lions’ match up against Obion County Central at Dresden High School Friday night. Photo by Jasmine Williams/The Enterprise

DRESDEN (September 25) – The Dresden Lions hosted the Obion County Rebels Friday night and picked up another win for the season.

Coming off their loss from the week prior, Dresden was proud to have a home-game win over Obion County, with a final score of 20-12.

The first quarter got off to a slow start as both teams faced strong defenses. Dresden started with the ball and had a turnover on downs to Obion County where the Rebels were also unable to make a first down.

It seemed the game would go into the second quarter without a touchdown until Chandler Turnbow made a 12-yard run into the end zone. A failed extra point kick by Mark Maddox had the Lions lead 6-0 at the end of the first.

The second quarter saw Obion County again unable to make it past the Lions’ defense. Dresden was unable to make a first down and gave the ball back to the Rebels, who faced another turnover. The Lions almost lost the ball twice with two fumbles that were both recovered by Turnbow.

It seemed Dresden would not score again before the half until quarterback Tatum Oliver threw the ball to Matthew Parker who ran for a touchdown. With the extra point being added, the Lions went into halftime with a 13-point lead over Obion County who had yet to put points on the board.

The Lions started the second half on a strong note as Obion County fumbled the ball and was picked up by Trevor Moore. The Lions were unable to make a first down and had to give the ball back to the Rebels. Obion County finally made it on the board with a 46-yard-pass run, but failed to make the two-point conversion leaving the score to 13-6.

Dresden responded soon after with a 50-yard pass and run by Raymond Johnson. The Lions put Obion County way back in the field with a 85-yard punt return. Obion County couldn’t score again in the third quarter and the Lions kept their lead at 20-6.

The fourth quarter began with Obion County making another touchdown, which brought the score to 20-12. The Lions’ defense was able to hold the Rebels off with a noteworthy play by Parker, who broke up a long pass.

Oliver finished the game with 188 passing yards. Turnbow had 86 rushing yards and one touchdown.

Raymond Johnson led in receiving yards with 63 and one touchdown.

Dresden’s next game is Friday, October 2 when the team travels to South Fulton. Kickoff is at 7 p.m.