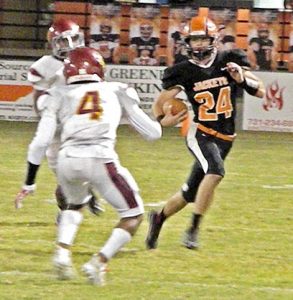 Greenfield’s Hayden Smith gets around the Vikings’ defense during Friday night’s match up against Humboldt. Smith scored four touchdowns during the game. Photo by Jasmine Williams/The Enterprise

GREENFIELD (October 2) – The Greenfield Yellowjackets hosted the Humboldt Vikings for the Jackets’ Pink Out game for Breast Cancer Awareness Month Friday night. The Jackets continued their winning season by ending the game at 6-0, beating the Vikings 30-6.

The first quarter got off to a slow start for both teams as neither team scored. That changed in the second quarter with Greenfield having Hayden Smith score two touchdowns. The Jackets were also able to make both two-point conversions, something head coach Don Pitt said the team has been focusing on. This led to the Jackets with a score of 16-0 going into halftime.

The second half started with Greenfield on the 47-yard line as the team quickly made its way down the field. Hayden Smith again scored another touchdown. The Jackets had Samuel Thum run the two-point conversion for a 24-0 lead. Humboldt received the ball next, but found the Jackets’ defense to be too much, resulting in the Jackets receiving the ball in no time. The Jackets saw Hayden Smith almost single-handedly run down the field in each play before making another touchdown for the Jackets. Greenfield missed the two-point conversion and took the lead up to 30-0.

It seemed as if Humboldt was going to leave Greenfield not scoring at all. However, the Vikings did break the Jackets’ defense for a touchdown near the end of the fourth quarter. This put the team on the board but it was too late as Greenfield took a knee to end the game 30-6.

Smith stole the game having the most rushing yards of either team with 156 yards and four touchdowns. Kiah Reynolds had the most receiving yards with 34 and Will Harris had 24. Thum and John Featherston tied for the most tackles with five. The team overall had 93 passing yards and 179 rushing.

Coach Pitt after the game said the team wanted to have more control of the ball and focus more on the special teams. The team also worked hard to have fewer penalties. Pitt also said Smith was improving greatly as the season progressed and hopes he will be even better in the coming weeks. He was also looking forward to the bye week as some players have been out with injuries and will hopefully be back after this break.

This Friday Greenfield is in a bye week. It will return on the road, but stay in Weakley County as it faces off against the Gleason Bulldogs at Gleason Friday, October 16.