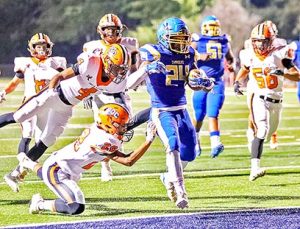 Westview Charger Marquis Taylor runs the ball into the end zone for one of the team’s three touchdowns scored against South Gibson during the team’s district match-up at Hardy Graham Stadium Friday night. Taylor scored all three of the team’s touchdowns that evening. Photo by Christel Thompson

MARTIN – The Westview Chargers hosted South Gibson Friday, October 2, when the team fell 26-19 to the Hornets despite a hard push in the second half.

Despite the loss the Chargers’ defense did well as it prevented South Gibson from scoring at all during the second half. Lane Pierpoint led the team in tackles with 11 and Hayden Smith had 8. Christian Ingram had one tackle, one forced fumble, one fumble recovery and a tackle for a loss of yards.

The offense had Ty Simpson with 132 rushing yards, but threw one interception. Marquis Taylor led in rushing with 18 carries for 141 and made all three touchdowns for Westview. Receiving the most Friday was Garner Anderson, with two catches for 42 yards and Javion Goins close behind with 38 yards from five catches.

Punter Jackson Abel made three punts in the game for 115 yards.

The Chargers hope to bring home a win Friday as they travel to Nashville Ensworth. Westview was scheduled to play against Bolivar, but that team is under COVID-19 restrictions.