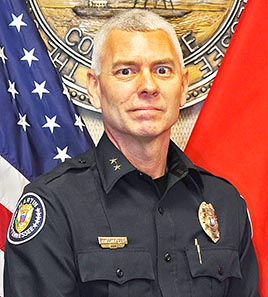 “It happened Saturday, September 5, close to 11 p.m.,” Officer Fuqua said. “I got up to go to the restroom, and as I was walking across the bedroom, I felt I was about to faint. I remember letting myself down on the floor so I wouldn’t fall.

“I don’t remember much after that, but my wife said I was down on all fours. I passed out, and the next thing I remember was her yelling at me and shaking me in an attempt to wake me up. When I came to, I had absolutely the most horrible headache. It was unbearable.

“I laid around here for about an hour thinking my headache would pass, but obviously, it didn’t. I got nauseated, which made everything worse.

“We discussed it and decided to go to the Martin Hospital, so she carried me in her car. They did a quick CT (computerized tomography) scan and determined I had a brain aneurysm that had ruptured,” Fuqua added.

Despite the extreme pain from his headache, local doctors could not give him any pain medication, because it would inhibit the ability of the medical staff at Vanderbilt University Medical Center to diagnose his condition.

“They worked feverously to get me to Vanderbilt,” he said. “It was super foggy that night, so neither Air Evac nor Life Flight from Vanderbilt could fly.

“Two individuals I’ve been friends with nearly my entire life, paramedic Brian Baker and EMT (Emergency Medical Technician) Kris Adams, transported me by Martin Ambulance from the ER (emergency room) at Martin hospital to the ER at Vanderbilt.”

Officer Fuqua states the medical staff at Vanderbilt performed another CT scan, and determined he had a subarachnoid hemorrhage in the frontal lobe, which is a life-threatening type of stroke caused by bleeding into the space surrounding the brain.

On Sunday, September 6, Dr. Michael Froehler and the neurology surgical team inserted a catheter in his groin, similar to a heart catheter, and pushed it all the way to his brain.

They put two coils in the veins where the aneurysm had ruptured and that stopped the bleeding. This kept him safe for the time being. A day or two later they discussed other procedures that are more permanent.

On Thursday of that week a surgical team, led by senior surgeon Dr. Rohan Chitale, performed a seven-and-a-half hour-long surgery, which was more invasive.

“They cut my head open and installed a metal clip through a small incision. The clip stopped the blood flow from the ruptured vein. Then, they bypassed the aneurysm and rerouted the blood flow to a different vein. The doctors agreed that was the only damage I had. It is classified as a no-deficit aneurysm.”

Officer Fuqua stated he is relieved to know the tiny piece of metal left inside his brain is not big enough to set off an airport scanner.

The section of hair shaved off for the operation has already pretty much grown back.

They monitored him for 14 days following the operation. During this time, doctors wouldn’t let him sleep longer than an hour.

“No one at Vanderbilt Hospital could explain why I had it, or how I survived, because, most people don’t,” Officer Fuqua said. “Before they sent me home, they monitored my brain activity for two hours.”

Afterward, they told him, ‘you’re good to go.’

“The doctors couldn’t guarantee I would never have another aneurysm, but they said this one would never be a problem, and there’s no sign of anything else.”

The medical staff also tested him for COVID twice while at Vanderbilt. If he had tested positive, he would have gone into isolation to continue treatment.

“Fortunately, my wife got to stay with me in my room in ICU (Intensive Care Unit) the entire time we were at Vanderbilt,” he said. “Because of the COVID situation, she was the only one who could be in there.”

However, he must return in 30 days for another exam, before being released from doctors’ care.

Officer Fuqua will be off work 30-35 days from the day they sent him home. Because Martin Police Department has a small staff, it is not possible for him to be put on light duty. However, he is prohibited from lifting heavy objects for now.

“I’m finishing my quarantine due to staying in Nashville, which is a critical county on the COVID list,” Officer Fuqua said. He noted this is in accordance with the policy of Martin Police Department.

When asked about his current medical status, Officer Fuqua said, “I’m good. I’m working through some physical soreness from being in the bed too long. I’m down in my lower back and a little bit hamstringed. I’m working with some home physical therapy folks and I’m making headway. Oddly enough, that’s my only physical and mental hurdle. Everything else has gone really well. Since I returned home, I haven’t had any headaches or dizziness or anything.”

While off duty, Officer Fuqua said, “I’m going to take it easy and make sure I’m ready to return to work.”

This is the second life-saving surgery he received at Vanderbilt. “I had a cancerous kidney removed in 2016,” Officer Fuqua said. “I had a checkup while I was at Vanderbilt and tests revealed I’m still cancer-free. These were the only two times I’ve been in the hospital.”

“It was amazing the outreach my family received from the entire community,” Officer Fuqua said. “I am so appreciative.”

Officer Fuqua has been in law enforcement for 20 years – all at Martin Police Department.

Assistant Chief Fuqua and his wife, Staci, reside in Martin. The couple has three children and three grandchildren.