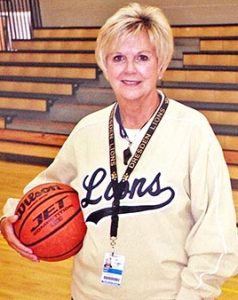 (The following article about Leigh Hart is based on an interview by Linda Ramsey, as well as quotes from Dresden Middle School Principal David Lewellen.)

Ramsey, who was Leigh’s teacher when she was a student at UT Martin, said, “I’m also a fellow cancer survivor. I have been cancer free for over 15 years.”

Ramsey told Hart, “I know that you are currently going through chemo, and we wanted to honor you for the extraordinary journey you have been on since you first found out that you had cancer. You have put up such a vigilant fight while staying positive and never giving up. You are a hero in our eyes, and we wanted you to represent all cancer survivors at this year’s event.”

Math teacher Rhiannon Coleman, who was Hart’s coaching assistant, is now the coach for the girls’ basketball team.

Principal Lewellen said of Hart, “She was the glue that held it all together. She was the face for Dresden Middle School. She touched a lot of lives while she was here. She played a vital role in helping the students connect with the school. In 2010, she and guidance counselor Jamie Rickman were the founders of The Lion’s Den, which is our student rewards program.”

Looking back at her journey with cancer over the last 20 months, Hart said, “At the end of January 2019, I noticed that there was something wrong with my energy level. My aunt had passed away and I was very busy, but my energy level just wasn’t right.

“I called Dr. Yogesh at the Dresden Clinic on Monday, February 4, 2019. They did blood work that day, and the next morning the Dresden Clinic called me during second period. I asked if I could wait until after school and was told to come to the clinic right away. When I arrived, they helped me walk straight into the exam room, and told me I could rest. I was told that I was severely anemic, and they needed to find out why.

“They contacted my husband, Dickie Hart, and within two hours I was in a hospital room at Volunteer Hospital.

“A hospitalist came in and gave me this analogy,” Hart said. “If he were to go to the service station and get his gas tank filled up, it is 100-percent full. Then, he said my tank is only 40-percent full. They gave me two pints of blood and iron, and then I began feeling like myself.

“I had an endoscope the next morning to determine where the blood had gone, and they found nothing,” Hart said. “The next day, they did a colonoscopy and found a golf-ball size encapsulated tumor.

“Dr. Patel removed it and sent if off, and on February 12, 2019, I was told that I had cancer and my diagnosis was metastatic colorectal cancer. It was stage 4, but Dr. Patel said it’s good that it’s encapsulated.

“On February 18, 2019, I had an afternoon appointment in Memphis,” Hart said. “I was told to come early and get a CT (computerized tomography) scan in the morning prior to the appointment. At first, he said this is no problem to remove as it’s encapsulated. Then, he remembered that I’d had a CT Scan, and he stepped out to read those results. He came back in the room with a different look on his face. He told me that my liver was covered up with tumors, and that I needed to start chemo right away. Five minutes later, I was visiting an oncologist on the third floor. I had a port put in on February 20. My first round of chemo started on February 25, and I got extremely sick.”

Hart states after surgery, her blood work was good, but she had to wait before taking a certain drug, Avastin, as

it can hinder the healing process. She had CT scans conducted again in June, September and December, and each time the tumors had gotten smaller.

Then she started having allergic reactions to the chemo drugs and Dr. Jankov reduced the dosage of one of the drugs, which is really liquid platinum, to one-third of what had been used. Up to this point, she was having chemo every two weeks.

Due to a setback from a procedure done in March, which involved removing her gall bladder, Hart couldn’t take chemo over the summer. She resumed chemo treatments a couple of weeks ago. Her tumors have grown in size and there’s also now a small one in her lung.

When asked, “What advice would you give other cancer survivors?” Hart said, “Keep your head up — Be positive and keep a positive outlook. Pray. Let people in your life, and let them be a part of your journey. Let your circle of friends in and let them help. It’s kids in my case. Allow them to do things to help. My players really wanted to do something. Last year they surprised me with a ‘Hoops for Heart’ event, and there wasn’t an empty seat in the house.

“Your personality has so much to do with it,” Hart said. “They told me that I can’t be cured, and they’re trying to prolong life. Your attitude plays so much of a role, and I’ve always been an optimist. Look for opportunities to interact with others. Think about things that have been uplifting. Have a relationship with God. I don’t know how people make it without God in their lives on this journey.”

From being an Olympic torchbearer to shining a light in her community, Leigh Hart has had an impact on the lives of our youth. You can travel the streets of Dresden and throughout the entire county and you will find stories of Leigh Hart touching lives through her teaching, coaching and philanthropy.