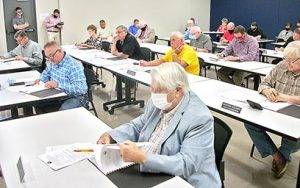 Weakley County Commissioners approved several items during Monday night’s meeting, including a resolution forming a new standing committee dealing with opening, changing or closing roads not maintained by any other governmental entity.

DRESDEN (September 21) — The Weakley County Commission approved several resolutions, appointments and reports, during its regular monthly meeting on Monday, September 21, which was held in the Seminar Room at the Weakley County Personal Development Center.

The Commission approved a resolution authorizing West Kentucky and Tennessee Telecommunications Cooperative (WK&T) to submit an application to the Tennessee Department of Economic and Community Development for the Tennessee Broadband Accessibility Grant for $2 million. The grant is to provide broadband access to an unserved area of Weakley County. The cooperative and Weakley County will match those funds, making the grand total invested approximately $6 million.

Weakley County Mayor Jake Bynum stated Weakley County has also applied for a $2 million federal grant for the same purpose. In this manner, it is hoped either the federal or state grant will be approved. Since Weakley County only wishes to obligate itself to contribute $2 million for its share of the grant at this time, if both grants are approved, whichever grant is approved first will be accepted and the other declined.

Commissioners approved a resolution creating a procedure for opening, changing and closing of public roads not maintained by any other governmental entity. Since Weakley County has no regional planning commission, the resolution provides a legal procedure to open, close and change county roads. The resolution, which requires a two-thirds majority to become effective, calls for establishing a standing committee comprised of five county commissioners selected by the chair of the county legislative body each year. The committee shall operate for the sole purpose of considering applications to open, change or close county roads and for no other purpose.

The purpose of the Library Board is to direct the affairs of the library system, including the appointment of a librarian and such assistants. The resolution stipulates “the County Library Board shall consist of nine members appointed by the county legislative body for a term of three years. Not more than one official of the county legislative body may serve on the board. The members shall serve without salary. Board members may serve two consecutive terms and may be reappointed after a minimum three-year break in service.”

The Commission also approved several financial resolutions. A couple of them deal with the General Purpose School Fund; another focuses on Special Education; others involve the Weakley County Highway Fund, Library Fund and Election Commission. (See article “Finance, Ways And Means Budgets COVID Grant Funding” for a detailed description of the financial resolutions.)

Under new business, the Weakley County Commission approved the following:

Under elections, appointments and confirmations, the Commission approved the following actions:

Some of the commissioners were moved from one committee to another as follows: