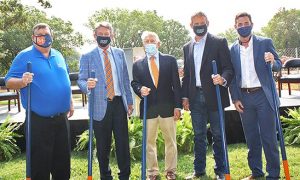 MARTIN (September 18) – The University of Tennessee at Martin community, along with numerous notable Tennessee officials, gathered in front of the future site of the Latimer Engineering and Science Building Friday, September 18, to honor Union City couple Bill and Carol Latimer for their $6.5 million gift to the university. The Latimers, Tennessee Gov. Bill Lee, Lt. Gov. Randy McNally and UT President Randy Boyd were all in attendance to help break ground on the first academic building to be constructed at UT Martin in more than 40 years. Joining in the celebration were Martin Mayor Randy Brundige and Weakley County Mayor Jake Bynum, along with local elected officials and representatives.

“Bill and Carol truly understand the vital role education plays in changing the trajectories of families, strengthening communities and developing future leaders,” said Dr. Philip Acree Cavalier, UT Martin provost and vice chancellor for academic affairs. “Like many of the speakers and dignitaries who are here today, they value the role the University of Tennessee at Martin plays in the economic development of West Tennessee. Recognizing the new ways this building will contribute to the transformational experiences of our students, Bill provided the lead gift for this building that enabled us to secure the matching funds from the state. Today, because of Bill’s incredible leadership and generosity, we are officially breaking ground on this great new facility,” Cavalier added.

Bill donated the 10-percent match for the $65 million, 120,000-square-foot, three-story STEM building in 2016, while Dr. Robert Smith was UT Martin interim chancellor. Bill attributed Smith’s diligent work to bettering the university as one of the reasons the groundbreaking ceremony was even happening. Through the hard work and dedication of many UT Martin officials, including Smith and current UT Martin Chancellor Keith Carver, over the past four years, the Latimers’ donation was realized, and construction began. It was notably one of the largest single gifts in UT Martin’s history since the beginning of record-keeping of donations.

Bill said of the many reasons he and his wife decided to provide UT Martin with the match needed to fund the building, his faith in God and his faith in UT Martin were the leading factors.

Bill thanked the legislative efforts of State Representative Andy Holt and State Senator John Stevens for sponsoring a bill in 2016 reducing the 25-percent match to a 10-percent match required by state building projects at public colleges and universities to begin construction.

The Latimer Engineering and Science Building will house the departments of chemistry and physics, computer science, engineering, mathematics and statistics and the pre-professional health sciences program. It will feature classrooms, laboratories and offices, as well as a small observatory.

The building is estimated to have an economic impact of $56.3 million, as well as create more than 900 jobs from initial construction through the first 10 years of graduates.

“What happens in rural Tennessee matters to everyone in Tennessee,” Lee added.

UT System President Randy Boyd remarked, “It is the greatest decade for the System.”

The Latimer Engineering and Science Building is scheduled to open fall 2022. Current construction for the Latimer Building can be viewed from the Holt Humanities Building webcam at utm.edu/webcams.