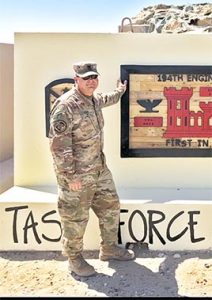 SMYRNA (September 18) — Local Tennessee National Guard members were among approximately 116 soldiers from the 194th Engineer Brigade based out of Jackson, who returned home September 18, 2020, after a successful deployment to the Middle East.

The 194th was activated October 2019 and spent the last 10 months as the U.S. Central Command Theater Engineer Brigade Headquarters, performing the functions of a corps level engineering strategic assist.

They were responsible for directing the efforts of 3,400 soldiers conducting engineering operations and projects in eight different countries throughout the U.S. Army Central Command area of operations in the Middle East region.

With the COVID-19 pandemic peaking during their deployment, daily operations became trickier, but the mission was greatly successful.

Sgt. Cobb was stationed at Camp Arifjan, Kuwait, but visited other sites during his deployment.

He serves as a technical engineer, responsible for survey and design of roads, buildings and construction plans.

“Because of COVID, we had to wear masks wherever we went,” Sgt. Cobb said.

“The people of Kuwait were nice, and the culture was great,” he said.

“I feel blessed to get to go there with a lot of nice people. It was a wonderful opportunity that God gave us.”

“Overall, I think it was a good deployment. Morale was good. It’s good to be home.”

Sgt. Cobb is still in Ft. Bliss, Texas, but will be home soon.

He has served seven years in the military and plans on attending a school, as soon as a class becomes available, to pursue becoming an officer.

Master Sgt. Webb said, “Everything was great. It was a good deployment, and we all returned safely.”

Master Sgt. Webb was stationed at Camp Beuhring, Kuwait, where he served as an equal-opportunity advisor.

He noted the best part of the trip was the experiences he had overseas. The only significant negative aspect of his deployment was the outbreak of COVID, which caused everything to be “locked down.” Wearing masks was uncomfortable in the hot environment. Also, it limited recreational activities

Master Sgt. Webb stated the troops appreciated the support they received from the people in Tennessee.

He stated no one became infected with COVID and everyone returned safely to the United States.

When he returned to Tennessee, Webb was released upon arrival at the 194th’s Brigade Headquarters in Jackson. His spouse and children were there to welcome him home.

After a month-long furlough, he will return to his National Guard unit in Union City, where he serves as shop supervisor.

Master Sgt. Webb has served as a member of the Tennessee Army National Guard for the past 28 years.

Before returning to Tennessee, the soldiers conducted a two-week quarantine period and a de-mobilization process in Fort Bliss, Texas.