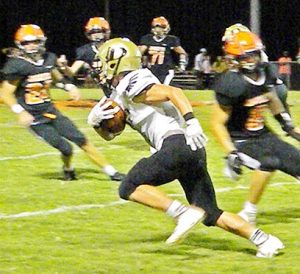 Dresden Lion Tristan Jett dodges Greenfield’s defense for a first down during the match up between the teams Friday night.

GREENFIELD (September 18) – The Greenfield Yellowjackets hosted the Dresden Lions in a game that would end in a showdown in overtime. The Yellowjackets came into the game 3-0 for the season, while the Lions were 1-1 and had just won their last game in multiple overtimes.

At the start of the second, Greenfield was slowly making its way down the field before the team fumbled and recovered the ball. The Jackets wasted no time and tossed a 25-yard pass resulting in a touchdown by Samuel Thum.

The Lions responded with a 45-yard passing touchdown by quarterback Tatum Oliver to Raymond Johnson. The Lions missed their extra point, but had the game tied at 6-6.

The Jackets received the ball, but stood no chance with the Lions defense, which sacked Greenfield’s quarterback and forced a fumble. The ball was then picked up by Dresden’s DeAngelo Lambert, who ran for a Lions’ touchdown. The Lions had the lead at 12-6. The Jackets did not want to go into halftime down on points. Greenfield made its way down the field and had Hayden Smith run for a four-yard touchdown, tying up the game at 12-12 at the halftime.

Both teams returned after the halftime looking to break the tie and take a lead, but both found it impossible to score again. Dresden’s defense prevented Greenfield from getting a first down. This resulted in both teams having to punt or have a turnover on downs as a result of strong defensive lines.

At the end of the fourth quarter, Dresden did attempt to take the game with a field goal from the nine-yard line, but it was no good.

The game went into overtime. The teams had a coin toss to decide which would have the ball first. Dresden won the toss and started on the 10-yard line and had four attempts to make a touchdown. Chandler Turnbow ran the ball, but was stopped by the Jackets’ defense. The Lions, being unable to score, gave the ball to Greenfield, who passed to Thum for a 10-yard touchdown. The Jackets missed the extra point, but won the game in overtime with a final score of 18-12.