GLEASON (September 17) — The two major topics of discussion during a meeting of the Gleason City Board held Thursday, September 17, were selling a 15.1-acre tract of city-owned property for industrial development and street paving.

Although an unnamed local business previously expressed interest in procuring 15.1 acres of city-owned property to expand operations, it is unknown if the business is still interested in the property. If the company builds a structure at the site, plans call for hiring approximately 20 additional employees.

Mayor Diane Poole stated she has been in contact with Weakley County Economic Development (WCED) Director Shelby Spurgeon concerning the parcel of land on Motherall Road, located behind the city’s water plant. The discussion centered on developing an incentive package for the Gleason company’s expansion. Poole announced the city does not have information to proceed.

The mayor stated, if the industry wants to purchase the land, the fair-market price for the parcel must be determined. The 15.1-acre property under consideration is in two plots, 7.4 acres and 7.7 acres.

The city board and WCED Director Spurgeon will hold a conference call with the prospective industry Thursday, September 24.

If the business opts to not purchase the property, board members agreed to take measures to attract other prospective industries to locate at the site.

Mayor Poole mentioned the possibility of working with Spurgeon in an effort to procure grant funding to develop the property and possibly construct a spec building to attract additional industry to Gleason.

Alderman Keith Radford stated public utilities must be made available at the site.

Additionally, Mayor Poole stated Motherall Road must be improved and widened to two lanes to make it accessible to any prospective industry.

Another important issue discussed by the board was prioritizing what streets need to be paved with funds in the fiscal year’s budget.

Poole said there is $50,000 in the budget for street paving and maintenance. She noted, when this is added to a $60,300 COVID Relief Fund grant, the city has $110,300 in available funds for paving and patching potholes.

The board agreed to spend $27,000 of these funds to apply top-coat to streets paved last year, which includes Carlton Street, Carlton Terrace, Phelps Street and Church Street.

During a discussion concerning borrowing the money to improve other city streets, Mayor Poole stated all but $10,000 is owed on $120,000 the city borrowed for street improvements. She added it was for a three-year note and it has only been a little over a year since the money was borrowed. “I hope to get that paid off this month, so we can borrow more,” Mayor Poole said.

The board agreed to borrow money to complete additional paving where it is needed the most, which includes Carlton Street, Carlton Terrace, Phelps Street and Church Street.

Board members agreed the poor condition of city streets necessitates borrowing funds needed to improve roads in the future.

Kemp Honored by NAAE for Service 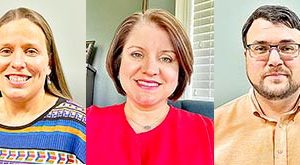 Teachers-Turned-Coaches Focus on Reading and Math in Weakley Schools