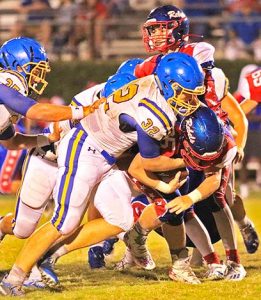 Lane Peirpoint of Wesetview makes a tackle during the team’s game against the Rebels Friday night. Photo by Clinton Smith

OBION COUNTY (September 11) – The Westview Chargers went up against the Obion County Rebels at Obion County Central High School in the Chargers’ fourth game of the season Friday, September 11.

The game started with 14 points in the first quarter. By halftime the Chargers increased their lead to 35-8, with Obion County scoring only one touchdown and a two-point conversion. In the second half, Westview prevented the Rebels from gaining any more points, and won the game 49-8.

Garner Anderson had the most receiving yards with six catches and 104 yards. Marquis Taylor has four catches for 91 yards and a touchdown. Omarion Harris had two catches for 75 yards and one touchdown.

Punting was Jackson Abel who finished Friday’s game with three punts for 31 yards.

The Chargers are 4-0 for the season. After their game against Obion County, the team has three games where it has scored more than 40 points.

Westview is hoping to keep the momentum going as it host Covington for the team’s first home game of the season. Kickoff is at 7 p.m. at UT Martin’s Hardy-Graham Stadium Friday, September 18. 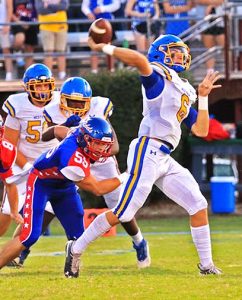