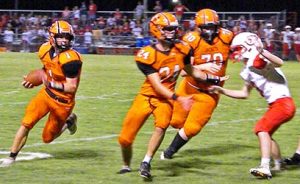 GREENFIELD (September 11) – The Greenfield Yellowjackets hosted the South Fulton Red Devils not only for the team’s first region game of the season, but for its homecoming. The Jackets did not disappoint as they won their game 18-14.

It was a slow start in the first quarter as the ball went between Greenfield and South Fulton three times. However, near the end of the first quarter, Greenfield was on their 40-yard line, Baker Porter was given the ball and ran for 60 yards for a touchdown. The Jackets failed for the extra two points, but had the lead going into the second quarter with 6-0.

The beginning of the second quarter saw South Fulton fumble a snap and recover. Greenfield received the ball but suffered a loss of downs. The Jackets attempted to punt the ball to the Red Devils, but the snapped ball was missed and had South Fulton on the one-yard line. The Red Devils ran that one yard for a touchdown. The team was successful in getting a two-point conversion and led 8-6.

Greenfield started the second half with receiving the ball and Porter threw an interception. The Jackets prevented South Fulton from having a first down and got the ball back. From that point, the Jackets slowly made their way towards the end zone where Porter made a nine-yard touchdown. This had the Jackets go into the final quarter still behind by two points at 14-12.

At the start of the fourth quarter South Fulton almost increased their lead over Greenfield by scoring a touchdown. However, a flag against South Fulton prevented the touchdown from being counted and the Red Devils were unable to score again.

Greenfield wasted no time with running the ball down the field. After a long throw from Porter to Will Harris, Harris ran for 48 yards for a touchdown. The Jackets missed the extra points, but had the lead at 18-14.

Greenfield’s punt to South Fulton was fumbled, but recovered for the Red Devils. In the next play, South Fulton threw an interception to Harris, giving Greenfield the ball and the game. South Fulton failed to make a first down and gave the ball back to Greenfield for the win.

It is no surprise Porter had the most rushing yards of 155 yards with two touchdowns. The team finished with 59 passing yards and 259 rushing yards.

This win puts Greenfield 3-0 for the season and 1-0 in the region. The Jackets will host the Dresden Lions Friday night for another regional game. Kick off is at 7 p.m. in Greenfield. 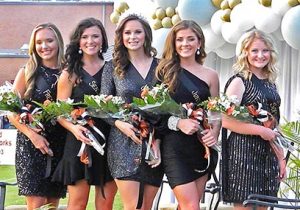