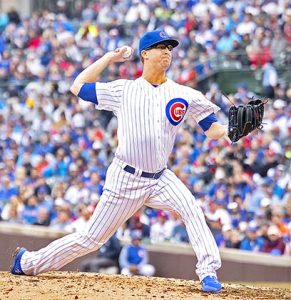 Former University of Tennessee at Martin Skyhawk and Chicago Cub Alec Mills made history Sunday in Milwaukee, Wisconsin when he pitched a no-hitter against the Brewers.

Mills’ career-high 114th pitch of the day officially etched his name in the MLB record book, as he induced a groundout up the middle to shortstop for his first complete game and shutout in the major leagues. Seconds after the final out was recorded, Mills was welcomed with a long embrace by catcher Victor Caratini and was soon mobbed by his Cubs teammates and coaching staff.

“It’s kind of crazy, I didn’t know how to celebrate,” Mills told Marquee Sports Network immediately after the game. “It didn’t really hit me until I was walking off the mound in the seventh inning. My heart was racing a little bit – I had to relax and calm down. Everything just came together today – it’s a memory I will have forever.”

Mills’ gem was the second no-hitter of the 2020 MLB season, as Chicago White Sox right-hander Lucas Giolito also accomplished the feat against the Pittsburgh Pirates August 25. Mills became the first Cub to toss a no-hitter since Jake Arrieta at Cincinnati April 21, 2016.

No Brewer made it past first base all day against Mills, who pumped in 74 pitches for strikes, while retiring 16 of the final 17 batters he faced. The only Milwaukee batters to reach base on Mills came via walks in the second, fourth and seventh innings. His final stat line included 10 groundouts, five strikeouts and three walks for the National League Central-leading Cubs.

Mills is now 5-3 on the season with a 3.93 ERA over 10 appearances (nine starts). Boasting a four-pitch arsenal, opposing batters have only mustered a miniscule .204 batting average off the Clarksville, Tenn. native. In 52.2 innings, he has collected a 2.2 strikeout-to-walk ratio (39 strikeouts against just 17 walks) and a 1.06 WHIP (walks plus hits per innings pitched).

A former walk-on at UT Martin, Mills became the first Skyhawk to ever play in a MLB game in 2016. That followed a successful three-year collegiate career as Mills still ranks in the top-10 in school history in appearances (67, sixth), strikeouts (165, seventh) and wins (13, eighth).

When asked about his journey from UT Martin to baseball lore on the Cubs’ postgame show, Mills gave the advice to never give up.

“I definitely would have told (anybody who told me I would have thrown a no-hitter) that they were crazy,” Mills said. “They gave me a chance there (at UT Martin) and other teams have also given me a chance. I just want to try to keep proving them right.”