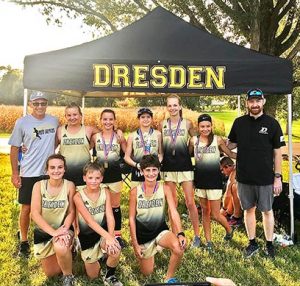 The Dresden Lions Cross Country team and coaches pose for a photo after finishing a race in Dyersburg, where the girls team came in second place.

Brice Rother, of the boys’ team did not race, but his teammates Landon Floyd and Ryne Tarver participated in the event. Floyd came in second place at 13:32 with Tarver coming in 65th place with a time of 17:21.

In the girls’ race, Ellie Poole finished first place with a time of 13:42. Alivia Rainey was not far behind, coming in seventh place at 15:56 and Alexis Harrison finished tenth at 16:32. This was Harrison’s first time to place in the top ten.

Next the team traveled to Camden to participate in a 1.5 mile race Saturday, September 12. The girls had two team members to medal: eighth-grader Ellie Poole who came in second at 9:43 and fifth-grader Bailey Warbington who finished 15th with a time of 11:06.