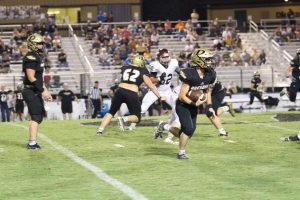 DRESDEN (September 11) — The contest involving two evenly matched teams was settled in four overtimes in Dresden on Friday, September 11.  It was a contest in which neither teams scored in the first three quarters.
Dresden scored first on Chandler Turnbow 16-yard run just one minute in the fourth quarter. The two-point conversion failed.
West Carroll answered with a Xander Moon pass to Tyler Shaddon for a 31-yard pass-rush.
Dresden had one last possession in regulation with the series ending with a Tatum Oliver pass being intercepted by Hudson Bolton with 3.3 seconds remaining. West Carroll allowed the clock to expire with the score 6-6.
In the first overtime, lined up at the 10 yard line, West Carroll’s Moon scored to make the score 12-6.
Dresden answered with a run by Turnbow followed by a QB keeper by Oliver for the TD. The extra points failed.
In the second overtime, it was Dresden with first possession. Turnbow ran on first down and a pass to Matthew Parker for a TD. The PAT failed and the score was 18-12 in favor of Dresden.
West Carroll answered on a Moon TD. The two-point conversion failed and the score was deadlocked at 18.
In the third overtime, West Carroll had possession first. Moon ran on first and second downs, punching it in from the three yard line. Moon added the two-point run for a score of 26-18.
Dresden answered with a TD and two-point conversion.
In the fourth overtime, Dresden’s Turnbow powered in on first down. Mark Maddox added to the PAT to make the score 33-26. West Carroll was assessed a ‘roughing penalty’, which was assessed on the next series.
In their final possession, starting at the 25 yard line, an intercepted pass ended the game with Dresden winning 33-26 at 10:15 p.m. 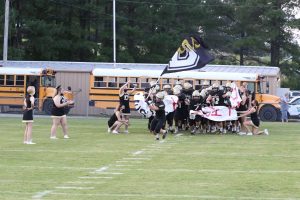