Those were the numbers American Legion Post #55 Vice Commander Jackie Laird cited as he opened the 9/11 commemorative ceremony at the Martin Post Friday evening on the 19th anniversary of the terrorists attacks on the nation.

Laird reminded the crowd gathered outside of the Post these numbers represented Americans, asking people to never forget that day or their services and sacrifices.

The Legion Post partnered with Martin Boy Scout Troop 1776 for the “We’ll Always Remember” 9/11 commemorative event. Troop member Briley Johnson had a vision for six years to offer the community a proper flag-retirement ceremony, which paid tribute to veterans and service members.

Martin Mayor Randy Brundige and American Legion District 9 Commander David Cobb were among the guest speakers that night. Brundige reminded visitors to always remember those who lost their lives that day, while Cobb stressed America is still one of the greatest nations in the world.

As part of the ceremony, troop members gave each veteran in the audience a flag grommet from the 250 flags to be retired that evening. Johnson noted veterans were very much a part of this nation just as much as the American flag represents freedom.

“Our fallen took their last breath fighting for this nation and they should always be remembered,” Johnson said.

Troop members demonstrated how to properly fold a flag and what the 13 folds represent:

This is what the 13 folds mean:

As troop members prepared to retire the flags on display, Johnson reminded guests of the words of the country’s national anthem. First responders on duty that evening were given grilled hamburger and hot dog meals in appreciation of their service every day, but in particular, on Patriot Day. The Legion and Troop 1776 plan to offer quarterly flag retirement events, with plans under way for next year’s 20th anniversary of 9-11-2001. 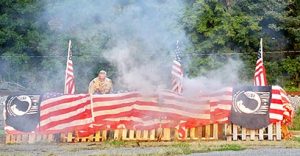 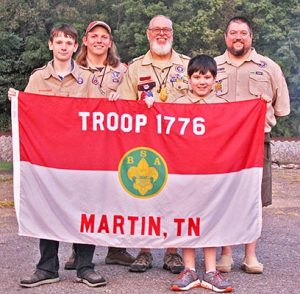