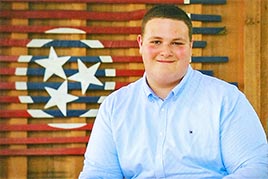 MARTIN (September 8) – Daniel Capua of Martin received the 2020 Philharmonic Music Guild Scholarship for study at the University of Tennessee at Martin.
“Music is and always will be one of the biggest parts of my life,” said Capua.
“For me, there is truly no better feeling than making music with others who love music just like I do,” he added.
A recent graduate of Westview High School, Capua, the son of Sal and Kris Capua, is now a first-year college student majoring in music education. Capua appreciates the $500 scholarship that will help him with some of his expenses, and he knows members of the Music Guild will continue to encourage him throughout his studies. Mary Beard was chair of the selection committee for the scholarship.
At UT Martin, Capua plays in the Wind Ensemble, Jazz Band, the Studio D Saxophone Chamber Ensemble and the UTM Aviators Marching Band. He will also continue to take lessons from Dr. Doug Owens, a UT Martin faculty member and musician Capua studied with during his freshman year of high school.
When asked how he found his instrument of choice, the saxophone, Capua recalled the encouragement of Mike Tucker, band director at Westview.
“In 6th grade,” Capua said, “We tried all the instruments and Mr. Tucker picked the instrument he thought we had the most potential on of our top three instrument choices. My top choice was saxophone, and that is what I play today.”
Capua credits Tucker as a mentor who has helped him, not only in band, but in life in general.
“The love that he has for my high school band program and all of his students, past and present, has inspired me to do the same,” he said.
“Mr. Tucker never pushed me to into music, but I believe that is what he thought was the best route for me, and that is what I think is best for me,” Capua added.
Capua comes from a family with many connections to music. He said that all three of his siblings were in band at some point, so he grew up going to band concerts, competitions, and many band suppers. Because of all this music around him, he also became interested in music and being in band.
Capua’s older brother graduated from UT Martin with a degree in music education, and although his sister is not a music major, she has been involved in various musical ensembles on campus. Capua said he knew early on where his own journey in education and music might take him.
The Martin Community Band was also an inspiration for Capua. He has been playing with this band since the summer before 8th grade at Martin Middle School. In addition, Capua participated in one of the West Tennessee School Band and Orchestra Association ensembles for five years and qualified for one of the Tennessee Music Educators Associate ensembles three of the five years. He also participated in UTM Honor Band for four years, and he has been a member of the Stateline Saxophone Ensemble and Quartet since its inception.
“After I graduate from college,” Capua said, “I would like to teach high school band. Eventually, I might consider getting a master’s degree in conducting and perhaps teach at the college level.”
Dr. Doug Owens commented, “Daniel has been a leader in his high school band for years, and I am excited to see where his potential and hard work take him at UTM. He has placed first chair in the All West and All State bands multiple times, which, as student of an extremely competitive instrument with few spots for participation, is a highly impressive feat. He is the kind of student who gets the job done, no matter how tall the order, and does it with a great attitude! Daniel aspires to possibly go on to graduate school in conducting to hone his abilities, and I am fully confident that the opportunities UTM will provide him for music-making on the saxophone and on the podium will prepare him to be a future leader in music education.”