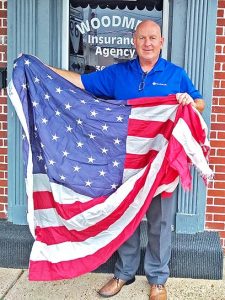 Wendell Verdell with WoodmenLife in Dresden holds American flags, which will soon be retired.

DRESDEN (September 11) – This September 11th it is important to not only remember those whose lives were lost, but to remember those who carry on the American tradition of honoring our country’s flag. The American flag stands as a somber reminder of all those who have stood with their country in the fight for freedom. The flag at half-staff September 11 is also important to unite the country after the devastating attack on the World Trade Center and Pentagon that day in 2001.

One of the biggest suppliers of American flags, behind the United States government, is WoodmenLife. Since 1947 WoodmenLife has presented more than 3.5 million flags across the country.

WoodmenLife was created in 1890 and has carried the ideals of family, community and country over those years. Each year, Woodmen chapters across the country take part in Flag Day celebrations, flag donations to city municipalities and non-profit organizations. In 2019, Woodmen donated 186,807 flags across the country. The Weakley County chapters stand as the sole distributor of flags for classrooms in Weakley County, all city buildings, all non-profit organizations, churches, cemetery flags and flags displayed during important patriotic holidays such as Memorial Day.

WoodmenLife responded to 9/11 by forming the “In Honor and Remembrance” ceremony. This was to remember the victims and recognize the police officers, firefighters and first responders. Hundreds of ceremonies were held each year at fire and police departments, city halls and other public places. These ceremonies include a flag donation to a non-profit group or erecting and dedicating a flagpole presented by WoodmenLife.

Locally, WoodmenLife has helped in refurbishing abandoned cemeteries and installing American flags and flag poles. Wendell Verdell with WoodmenLife in Dresden stated that his office donates more than 400 flags each year for Weakley County. Verdell also stated that his chapter helps to retire flags by bringing in Boy Scouts, Rolling Thunder or the National Guard to honor the flag as much as possible.

WoodmenLife has a form on its website that anyone can complete to request a large American flag to rent for special occasions.