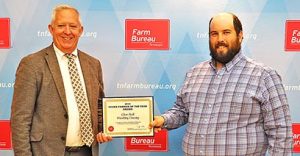 Hall was named county winner based upon his farm and financial records in 2019, in addition to his leadership on the farm, his community and in Farm Bureau.

Hall was raised on his family farm in Weakley County. He has been farming full time since 2008, after graduating high school. Currently, he farms in partnership with his father and together they raise corn, wheat and soybeans on 3,950 acres.

Hall has been involved with Farm Bureau and YF&R for many years, receiving runner-up in the Environmental Stewardship contest, serving as chairman for his county’s YF&R and serving on the Weakley County Farm Bureau Board of Directors.

For this achievement, Hall received $200 from Tennessee Farm Bureau and Service companies.