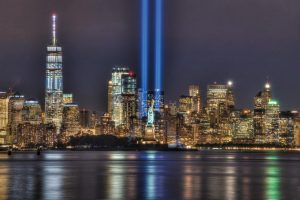 WEAKLEY COUNTY (September 9) — Most people will never forget where they were or what they were doing when they first heard the news about the terrorist attacks against the United States September 11, 2001. There are everlasting mental images of the two planes flying into the twin towers of the World Trade Center in New York City, and the damage caused by a plane slamming into the Pentagon, as well as the crash site of a fourth plane intended to target Washington, D.C., but the heroic actions of the passengers on United Airlines Flight 93 who fought back and prevented the terrorists from completing their mission of death and destruction. These events are permanently imprinted on the minds of Americans all across the nation.

Local citizens were asked how they reacted to the news of the terrorist attacks.

Weakley County Mayor Jake Bynum said, “I was a senior at Dresden High School, and we were having our group senior photo taken in front of the school, when the second plane hit. Initially, there was a great sense of fear. Even though it was far removed from us, we heard about the way it affected people here.”

Bynum stated Bobby and Susan German of Dresden were unable to return home after their flight was grounded in Canada for several days. Also, Joann Kemp’s daughter was living in Washington, D.C., which initially caused Kemp great concern.

“Although it didn’t happen in our backyard, it had an effect on everybody across the country,” Mayor Bynum said. “From that point forward, the world has never been the same in a lot of respects. Everyday things, like the way we travel, up until that point, were taken for granted.”

He also states, in many ways, Americans no longer have the same sense of safety and security.

“At the time, there was a great sense of community and national pride,” Mayor Bynum said. “On September 12, when we woke up, it was a better place, because people were kinder and nicer, and cared about one another maybe just a little bit more. There are times we should remember back to those days and how we felt about each other and the country, as we move forward. September 11 is always going to be a date when we honor those who lost their lives, and a day of remembrance. It took great sacrifice to keep us free and safe prior to and until this day.”

Dresden Mayor Jeff Washburn said, “I was sitting in the Coffee Cup that morning with the TV on when the first plane crashed into the Twin Towers. The people in the restaurant were absolutely shocked about what had just happened, but thought it was possibly an accident. A few minutes later, a second plane hit the second tower and there was complete silence in the Coffee Cup from the people watching it. There was absolute disbelief. Then, whispers started – ‘we’re under attack, we’re under attack’. It was a very dramatic morning. Those that were there continued to sit in the restaurant most of the morning watching what was happening. They watched the events of the day very closely. It was a day most people that were alive and cognizant at the time will never forget.

“Of course, we’ve seen what has transpired since then, with the wars in Iraq and Afghanistan, and the pursuit of Osama bin Laden to bring him to justice,” Mayor Washburn said. “It brought about a new era in this country, I think.”

Dresden Police Officer Eathan Lee said, “I was in sixth grade. The teachers were freaking out and crying.”

Martin Mayor Randy Brundige said, “I was at the old sale barn on Old Highway 22 when I first got word of the attacks. I turned on the TV and saw what happened. I was surprised and disgusted when I saw both towers come down that morning. I was in private business at that time, but I was an alderman on the Martin Board. I remember everybody was sad about what happened and the many lives that were lost and the damage that was done. The act of terrorism was a great disappointment.”

Martin Fire Chief Jamie Summers stated he was working at his off duty job at Sharon Cabinet Shop with William Brewer. “His wife came out to the shop and said, ‘take a break and come in the house. Something’s going on.’ So we took a break and watched it on TV. We saw the second plane hit. Then, the twin towers fell. It was pretty touching emotionally,” Chief Summers said. When asked if any local firefighters or emergency responders traveled to New York to assist in the clean up, he stated there were none as far as he knows. However, Memphis Task Force 1 was activated to assist at the Pentagon crash site.

Gleason Mayor Diane Poole said she was at home that day watching the television when the terrorist attacks happened. “It was hard to believe. I think everybody was in a state of shock, and was wondering what was going to happen next.

Gleason Alderman and former Jail Administrator for the Weakley County Sheriff’s Department, Jim Phelps, who is also a member of Rolling Thunder TN-Chapter 6 and Patriot Riders, said, “As far as I know, we’re not doing anything for 9/11. We sponsor the Veterans Day Parade in Martin every year, but we’re not sure we’re even going to do that this year, due to COVID.” Looking back at the events that unfolded on September 11, 2001, Phelps said, “I was at the Sheriff’s Department and the TV was on when it happened. It was shocking. I didn’t know what to say.”

Greenfield Mayor Cindy McAdams recalls she was teaching her Special Ed English class at Greenfield School, when the teachers were informed about what was going on. “We gathered in the teachers’ lounge and watched it on TV. I was flabbergasted. We were all amazed. We couldn’t believe it. A lot of the teachers turned on the TVs in their classrooms, so they and their students could watch it, because it was history. It seems like the principal announced it over the intercom during our break.”

Sharon Mayor Monroe Ary states, at that time, he and his two sons, operated Accura Machining Metal in Sharon, which supplies tooling for muffler hangers for GM, Ford and Chrysler. “We were working that morning, and I just happened to go into the house to get a snack,” he said. “When I turned on the TV to see what the news had to say, one of the buildings got hit about that time. So, I ran out and got the boys and brought them in the house. We all sat down to lunch, and about that time, a plane hit the other building. I said, ‘this is bad business, I don’t know what’s going to happen’. I thought the whole country was under attack. I didn’t know if something was going to hit somewhere else. It was a very awakening moment for me and my two sons. So, we spent most of the rest of the day watching TV.”

Jackie Laird, who serves as vice commander of American Legion Post #55 in Martin, as well as state and local director of the American Legion Riders, recalls he was working at Goodyear when the terrorist attacks of 9-11 took place. “I was on first break looking at the closed-circuit TV and saw the first plane hit. Other people in the plant asked, ‘is this real? Is this really happening.’ When the second plane hit the other tower and the twin towers fell, we knew we were under attack. The whole plant was dumbfounded and the break room was quiet. There were a lot of veterans at Goodyear, and they were ready to sign back up and make sure this doesn’t happen again in the United States.”

Weakley County Sheriff Mike Wilson said, “I was sitting at my desk and had no idea anything was going on when Chief Deputy Mark Black told me to turn on my TV. I turned it on just in time to see the second airplane hit. It was crazy after that. In the aftermath, I noticed there were no airplanes in the sky. All of the airports were shut down. There was a lot going on. They were taking care of the injured. They were trying to find those responsible. It was a different world. Everybody was dumbfounded and glued to the news, because it was a developing story. And you saw the different families involved. Everybody was volunteering to help. It was a sad time.”

Weakley County Municipal Electric System Director Faron Collins said, “We were at work in our old building and it was just a normal day, until we started hearing news bulletins about it. So, we congregated around a little 13-inch black and white TV, which was all we had in the building. Several of us watched it as it unfolded. It was heartbreaking to watch. It was hard to comprehend it. It was a somber mood all day long.”

Looking back 19 years after the terrorist attacks, Recruiting Sales Manager for WoodmenLife Wendell Verdell said, “I was at home getting ready for work and turned on the news and I was in shock. That changed America. We don’t ever want to forget that. It was a devastating day. I can’t imagine how it affected people’s lives that were personally involved. It affected all Americans, for sure. I think we need to learn from history, because, if it happened once, it could happen again. We’re the greatest nation ever created. But, we’ve always got to be on guard. There are other countries trying to destroy us, if we don’t get destroyed from within.”

Darlene Paddle said, “I was in the little café in Dukedom, and I was cooking when everyone there got upset. It was terrible.”